Williams are on the up, says Thai driver Albon

Williams signing Alex Albon says the former champions are on the rise in Formula One and he owes his old friend George Russell a beer for putting in a good word on his behalf. 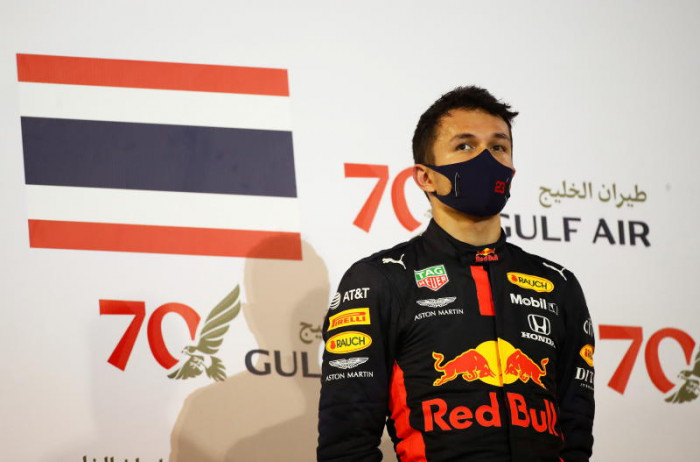 Williams are on the up, says Thai driver Albon

FILE PHOTO: Red Bull's Thai driver Alex Albon stands on the podium after the Bahrain Formula One Grand Prix at the Bahrain International Circuit in the city of Sakhir on Nov 29, 2020. (AFP)

Williams signing Alex Albon says the former champions are on the rise in Formula One and he owes his old friend George Russell a beer for putting in a good word on his behalf.

Russell, 23, is moving on and up to Mercedes next season as team mate to seven-times world champion Lewis Hamilton and his support for the Red Bull-backed Thai as his replacement for 2022 was evident.

Williams have struggled since 2018, scoring only one point in 2019 and none in 2020, but are now eighth out of 10 after Russell finished second in a rain-hit and farcical Belgian Grand Prix and Nicholas Latifi was ninth.

They also scored points with both drivers in Hungary in August.

"With Williams, they are clearly a team on the up, with the investment they have," Albon told reporters at the Italian Grand Prix where he is carrying out duties as Red Bull reserve.

"I had the chance to visit the team and they all seemed very positive, optimistic. They were very keen to talk to me and get involved in making things happen. It seemed like a great choice to get back onto the grid."

The team use Mercedes engines, which was an initial sticking point in talks with Albon given his close ties to Red Bull but the contract has safeguards in place to protect the German manufacturer's intellectual property.

"He is basically a Williams driver for the next 12 months. He has no links to Red Bull during that time," said Mercedes team boss Toto Wolff.

Albon has also been racing in the German Touring Car championship (DTM) this season after being dropped by Red Bull's main Formula One team to make way for Mexican Sergio Perez alongside now-championship leader Max Verstappen.

He said it had been "a tricky year" and watching from the sidelines never fun.

The Thai driver also revealed he looked closely at the US-based IndyCar series, travelling to Indianapolis, and the all-electric Formula E championship as fallback options if Formula One talks fell through.

A friend and rival of Russell and McLaren's Lando Norris through the junior series before they all broke into Formula One together, Albon said he was "thankful and excited" to be back.

"I'm close with George. Of course I knew more or less the landscape of where drivers were heading," he said.

"He was very supportive. I'd almost say too supportive because I remember the (Williams) board guys saying 'We can't really take George's opinion because he's so supportive of you'. I owe him a couple of beers."

Noppon seals 'biggest win of my life' in snooker snooker...