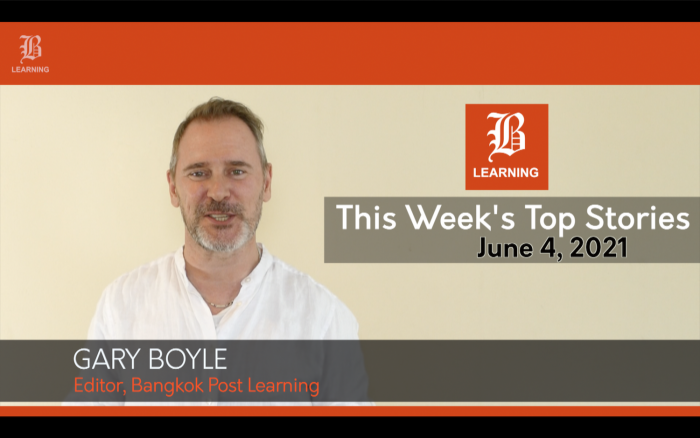 Learning Video VIDEO: This Week's Top Stories June 4 published : 4 Jun 2021 at 12:12 writer: Gary Boyle This week: reopening delays, expat jabs, volleyball racism and progress in the Nong Chompoo murder case Bangkok's City Hall announced on Monday morning it would allow five types of businesses, including spas and beauty clinics, to open from Tuesday. However, the Centre for Covid-19 Situation Administration delayed the reopening plan for at least 14 days. Thailand ended the second week of the 2021 FIVB Volleyball Nations League without a win, and faced a racist gesture . A Serbian player was caught on camera making a 'slant eyed' gesture , which created a huge backlash on social media after the match. The government said that foreigners living in Thailand who have registered for vaccination will start receiving the Covid-19 vaccine from next Monday. Priority will be given to the elderly and those with underlying diseases. The uncle of a three-year-old girl found dead in Mukdahan province last year surrendered to police. He is accused in the death of his niece Orawan "Nong Chompoo" Wongsricha in May 2020. Vocabulary announce : to tell people something officially, especially about a decision, plans, etc - ประกาศ, แจ้ง, แจ้งให้ทราบ backlash : a strong negative and often angry reaction to something that has happened - การสะท้อนกลับอย่างรุนแรง City Hall : a city government, in this case, the Bangkok city government - กรุงเทพมหานคร delay (verb) : to do something later than is planned or expected; to cause something to happen at a later time - เลื่อน, เลื่อนเวลา gesture : a movement that communicates a feeling or instruction - ลักษณะท่าทาง niece : a daughter of your brother or sister, or a daughter of your husband’s or wife’s brother or sister - หลานสาว priority : something important that must be done first or which needs more attention than something else - การมาก่อน racist : someone who does not like or respect people who belong to races that are different from their own and who believes their race is better than others - คนที่กีดกันหรือเหยียดเชื้อชาติ register : to put your name and other information on an official list in order to be allowed to do something, e.g., vote, study, stay in a hotel etc - ลงทะเบียน slant (verb) : to slope or to make something slope in a particular direction or at a particular angle - เอน, เอียง surrender : giving yourself up - การยอมจำนน underlying (adj) : important in a situation but not always easily noticed or stated clearly; existing under the surface of something else - ที่สำคัญและซ่อนอยู่, ที่อยู่ในตำแหน่งต่ำกว่า vaccination (noun) : giving someone a vaccine, usually by injection to prevent them from getting a disease - การฉีดวัคซีน Do you like the content of this article?
Read More