Prayut gets fined, and the third Covid wave continues 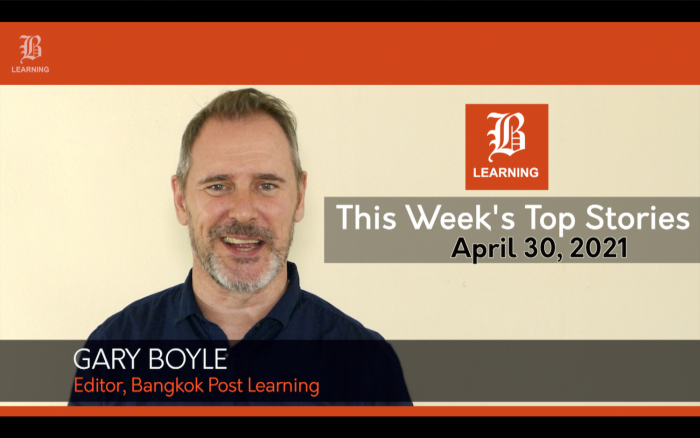 Learning Video VIDEO: This Week's Top Stories April 30 published : 30 Apr 2021 at 12:30 writer: Gary Boyle Prayut gets fined, and the third Covid wave continues Thailand's continuing third Covid-19 wave saw restrictions increasing around the country. Face masks must now be worn outside your home at all times, including in a car with more than one person. The fine for not wearing a mask can be up to 20,000 baht. Prime Minister Prayut Chan-o-cha was fined 6,000 baht for not wearing a mask during a meeting. Due to virus concerns , the new school term has been delayed . Schools are due to open 11 days later than originally planned, on June 1. And despite the third Covid wave , Hua Hin is looking to welcome foreign tourists again. The coastal town wants to allow vaccinated tourists to visit from October, if local vaccination plans are fulfilled . Vocabulary coastal : of an area of land beside the sea - แนวชายฝั่งทะเล concern : a worry - ความกังวล delay (verb) : to do something later than is planned or expected; to cause something to happen at a later time - เลื่อน, เลื่อนเวลา despite (prep) : used to show that something happened or is true although something else might have happened to prevent it; used to show that somebody did not intend to do the thing mentioned - ถึงอย่างไรก็ตาม, ทั้ง ๆ ที่ fine : an amount of money that you have to pay because you have broken the law - ค่าปรับ fulfill : to achieve something that you wanted to do, or to get something that you hoped for - สำเร็จ originally : the situation that existed at the beginning of a particular period or activity, especially before something was changed - อย่างเป็นอันแรก, โดยแรกเริ่ม restriction : a rule, action or situation that limits or controls someone or something - การจำกัด, การควบคุม vaccinate : to give someone a vaccine, usually by injection (putting a liquid, especially a drug, into a person's body using a needle and a syringe), to prevent them from getting a disease - ฉีดวัคซีน wave : an activity or situation which is happening again or is being repeated after a pause - Do you like the content of this article?
Read More

Thousands of Myanmar villagers poised to flee violence to Thailand

Cop charged with murder of wife

Govt to be stricter over work permits for foreign teachers

TEST YOURSELF: Why so hazy?

Arnon asks guards to be peaceful