LONDON - Fans could be back in English stadiums for the final weekend of the Premier League season and there are hopes the Euro 2020 final will be played at a full Wembley under plans announced on Monday. 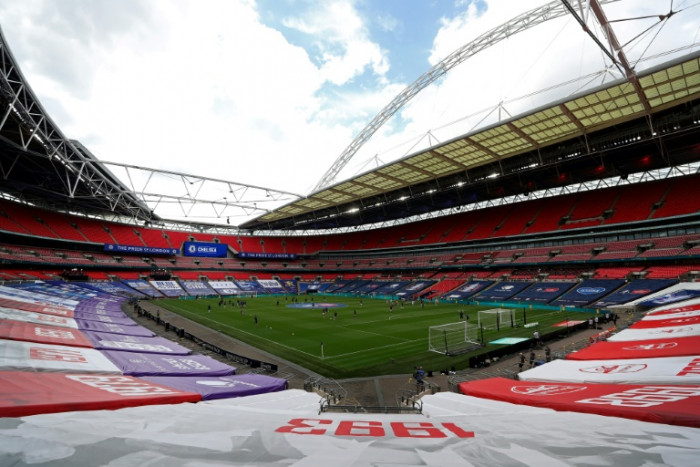 Sports UK virus roadmap offers hope for Premier League crowds published : 23 Feb 2021 at 08:45 writer: AFP Wembley stadium is due to play host to the Euro 2020 semi-finals and final LONDON - Fans could be back in English stadiums for the final weekend of the Premier League season and there are hopes the Euro 2020 final will be played at a full Wembley under plans announced on Monday. Under a four-step roadmap to ease the coronavirus lockdown announced by British Prime Minister Boris Johnson, elite sport will continue behind closed doors until May 17 at the earliest. But if there are no setbacks, crowds of up to 10,000 or 25 percent of seated capacity, whichever is lower, will be allowed to return. The Premier League season is due to finish on May 23. Other than a small number of matches played in front of 2,000 spectators late last year, the entire 2020/21 season has been played behind closed doors. All further restrictions would then be lifted on June 21 in time for a series of major international sports events in England. The semi-finals and final of Euro 2020, which has been delayed by a year due to the pandemic, are scheduled to take place at Wembley on July 6, 7 and 11. Wimbledon, which was abandoned in 2020 for the first time since World War II, is due to start on June 28 and golf's British Open runs from July 15 to 18 at Royal St George's in Kent. "As we continue to plan for The Championships in 2021, we welcome @10DowningStreet's announcements," said a statement on Wimbledon's official Twitter feed. "We look forward to continuing to work with them, @CommonsDCMS (Digital, Culture, Media and Sport) and the rest of sport with the ambition of welcoming spectators safely to our events this summer." Britain is one of the countries hardest-hit by the Covid-19 pandemic, with more than 120,000 deaths. But Johnson told MPs that with a mass vaccination programme easing pressure on overstretched hospitals, "the end really is in sight". - Euro 2020 - A Sunday Times report at the weekend said Britain could offer to host more Euro 2020 matches or the whole tournament due to the potential for crowds to return earlier than in other countries across Europe. On top of the semi-finals and final, Wembley and Hampden Park in Glasgow are due to host four matches each in the group stages and last 16. UEFA has so far publicly insisted it is sticking to the original plan of using 12 host cities across the continent despite the logistical challenges. Dublin, Amsterdam, Copenhagen, Saint Petersburg, Bilbao, Munich, Budapest, Baku, Rome and Bucharest are all due to have matches. However, British health secretary Matt Hancock said on Sunday he was unaware of any offer to host the tournament. The Football Association welcomed the easing of restrictions, saying in a brief statement: "The FA is absolutely delighted that fans will be allowed back soon. "The game is simply not the same without them and we look forward to the return of full stadia as soon as it is safe and possible." Cricket and rugby chiefs also welcomed the roadmap. A statement from the England and Wales Cricket Board said: "We are... very pleased to see the return of spectators to grounds from mid-May. Our leading venues strongly believe they have the technology and know-how to return to capacity crowds." Do you like the content of this article?
Read More

Bitcoin surges to another all-time high at B1.74m

US baseball may have shorter, later season over Covid concern

Worth of even-par rounds