Two more Covid-19 cases have been confirmed in Phuket, both patients infected at a local pub. 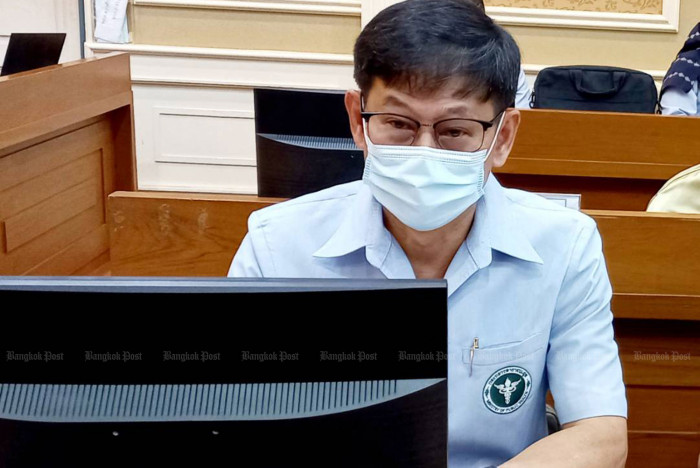 Learning Really easy news Two more Covid cases in Phuket published : 8 Apr 2021 at 13:41 writer: R May ORIGINAL SOURCE/WRITER: Achadthaya Chuenniran Phuket health chief Dr Koosak Kookiatkul confirms two more Covid-19 infections, at a press conference in Phuket on Thursday. (Photo: Achadtaya Chuenniran) Two more Covid-19 cases have been confirmed in Phuket, both patients infected at a local pub. Phuket health chief Koosak Kookiatkul said on Thursday the two people visited Illuzion pub in Patong. The new infections raised the number of cases reported recently on the island province to 10. One of them was linked to a pub in the Thong Lor area of Bangkok. Dr Koosak gave details of the eight other cases. The first was a 29-year-old receptionist at Kristal Club in Thong Lor. Her condition was not severe and she was being treated at a private hospital in Phuket. The second was a 38-year-old male official. He had visited a fighting cock arena, a massage parlour and a pub. His condition was not severe and he was being treated at Vachira Phuket Hospital. The third case was the wife of the infected official. Her condition was also not severe and she was being treated at Vachira Phuket Hospital. The fourth was the couple's son. He was being treated at the same hospital as his parents. The fifth and sixth cases were a married couple who live in the Thong Lor area of Bangkok and visited Phuket on April 2. They went to Illuzion pub and to Café Del Mar in Kamala. The couple later tested positive and sought treatment at Bangkok Phuket Hospital. The seventh and eighth cases were also a married couple. They went on a diving trip. The dive instructor asked them to take swab tests and the results came back positive. The couple were being treated at Vachira Phuket Hospital. All people known to have come into contact with the infected have been quarantined, the Phuket health chief said, with officials continuing to track down others. Search Copy Vocabulary chief : a person with a high rank or the highest rank in a company or an organisation - หัวหน้า, ผู้นำ condition : the physical state of a person, animal, thing or place - สภาพ parlour : a shop that provides particular goods or services - ร้านค้า (เช่น ร้านเสริมสวย) quarantine (verb) : to keep a person or animal that might have a disease separate from other people or animals so that they do not catch the disease - กักบริเวณ จำกัดบริเวณ receptionist : a person whose job is to deal with people arriving at or telephoning a hotel, an office building, a doctor's surgery, etc. - พนักงานต้อนรับ sought (past tense of seek) : tried to get/do something; asked for something - พยายามได้, พยายามได้มา swab (noun) : an act of taking a sample from somebody's body, with a swab - การเก็บตัวอย่างโดยใช้ฟองน้ำ ผ้า สำลีหรือวัตถุซับอื่น ๆ test positive : to show in a medical test that a particular virus, bacteria, disease or drug is present in the body - ตรวจพบว่าติดเชื้อ track down (verb) : to find someone or something - ตามรอย treat : to provide medical care - รักษา Do you like the content of this article?
Read More

Parliament in crisis session as protest moves to German...

Vaccines to reach all provinces

Man who dropped 'Boss' charge a no-show at hearing