LOS ANGELES - Tiger Woods made his first public comments since undergoing his fifth back surgery, with the 15-time major champion uncertain if he will be able to play at the Masters. 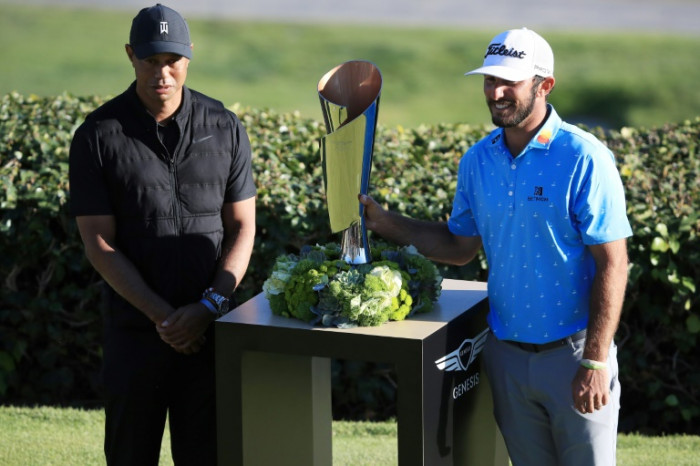 Sports Tiger isn't sure his back will be ready for a Masters return published : 22 Feb 2021 at 09:45 writer: AFP Tiger Woods, a 15-time major winner at left with 2021 PGA Genesis Invitational winner Max Homa, said Sunday he wants to play in April's Masters but isn't sure his surgically repaired back will be ready by then LOS ANGELES - Tiger Woods made his first public comments since undergoing his fifth back surgery, with the 15-time major champion uncertain if he will be able to play at the Masters. Asked if he plans to play in April at the Masters, which he won in 2019, Woods said, "God, I hope so." But the 45-year-old winner of 82 US PGA titles, level with Sam Snead for the all-time record, said it will depend on how well he recovers. "I'm feeling fine. I'm a little stiff," Woods said during Sunday's CBS telecast of the US PGA Genesis Invitational, where Woods serves as tournament host. "I have one more MRI scheduled so we'll see if the annulus is scarred over finally and then I can start doing more activities," Woods said. "Still in the gym, still doing the mundane stuff that you have to do for rehab, the little things where I can start gravitating toward something more." Woods had no timetable for a return and said of playing in the final round on April 11 at Augusta National -- "I've got to get there first. I don't have much wiggle room. I've only got one back." Woods underwent a microdiscectomy after playing alongside son Charlie at a December event but is unsure when his next competitive outing might occur. "I don't know what the plan is," Woods admitted. "The plan right now is to get through tomorrow and start progressing." Woods said he intends to make sure he works with doctors about his comeback and "do it correctly." Woods said he uses a long putter than before so he doesn't bend over as far. Do you like the content of this article?
Read More

Car makers in race for chips

How NFL sides are likely to fare this season