Myanmar security forces killed a man in the main city of Yangon on Monday, media reported, as activists called on ethnic minority forces in the diverse nation to back their campaign against military rule. 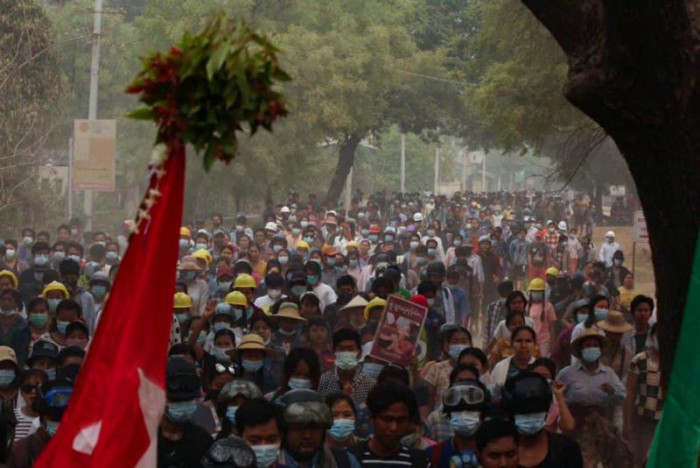 World Thousands take to Myanmar streets again after bloodiest day since coup 'Please, let this be an internal problem' says PM Prayut. published : 29 Mar 2021 at 15:59 writer: Reuters Protesters take part in a demonstration against the military coup in Monywa, Sagaing region of Myanmar, on Monday. (AFP PHOTO / FACEBOOK / ANONYMOUS SOURCE" Myanmar security forces killed a man in the main city of Yangon on Monday, media reported, as activists called on ethnic minority forces in the diverse nation to back their campaign against military rule. After the bloodiest day since the Feb 1 military coup with 114 deaths on Saturday , thousands of people took to the streets in numerous towns again on Monday, determined to show their opposition to the relapse into military rule after a decade of democratic reform. A man was killed and several were wounded when security forces fired in a Yangon neighbourhood, media and a witness said. "He was shot in the head," witness Thiha Soe told Reuters of the victim, who he said was 20. "They were shooting at everything on the road, even a Red Cross team. It's still going on as I'm speaking to you." Police and a junta spokesman did not answer calls seeking comment. Myanmar's Red Cross said in a message it was checking the report. Based on a tally by the Assistance Association for Political Prisoners advocacy group, 460 civilians have been killed since the coup. But despite the violence, crowds turned out in the central towns of Bago, Minhla, Khin-U and Pinlebu, the southern town of Mawlamyine, Demoso in the east and Hsipaw and Mytitkyina in the north, according to media and social media posts. The General Strike Committee of Nationalities, a main protest group, called in an open letter on Facebook for ethnic minority forces to help those standing up to the "unfair oppression" of the military. "It is necessary for the ethnic armed organisations to collectively protect the people," the protest group said. Bloodstains are seen on the protective gear of a protester, left on the ground during a demonstration against the military coup, in Taunggyi in Myanmar's Shan state on Monday. . (Photo by Handout / ANONYMOUS / AFP) 'Internal problem, please' Insurgents from different ethnic minority groups have battled the central government for decades over greater autonomy. Though many groups have agreed to ceasefires, fighting has flared in recent days between the army and forces in both the east and north. Heavy clashes erupted on the weekend near the Thai border between the army and fighters from Myanmar's oldest ethnic minority force, the Karen National Union (KNU). About 3,000 villagers fled to Thailand when military jets bombed a KNU area, killing three civilians, after a KNU force overran an army outpost and killed 10 people, an activist group and media said. Tens of thousands of Karen villagers have lived in camps in Thailand for decades and Prime Minister Prayut Chan-o-cha said he wanted Myanmar's latest problems to remain there. "Please, let this be an internal problem. We don't want to have an exodus, evacuation into our territory but we will observe human rights too," Gen Prayut told reporters in Bangkok. In Myanmar's north, fighting erupted on Sunday between ethnic Kachin insurgents and the military in the jade-mining area of Hpakant. Fighters from the Kachin Independence Army (KIA) attacked a police station and the military responded with an air attack, Kachinwaves media reported. There were no reports of casualties. Both the KNU and KIA have expressed support for the anti-coup movement and called on the army stop the violence against civilian protesters. 'Mass murder' Myanmar's military has for decades justified its grip on power by saying it is the only institution capable of preserving national unity. It seized power saying that November elections won by Nobel laureate Aung San Suu Kyi's party were fraudulent, an assertion dismissed by the election commission. Suu Kyi remains in detention at an undisclosed location and many other figures in her party are also in custody. At least six children between the ages 10 and 16 were among those killed in the bloodshed on Saturday, according to news reports and witnesses. Protesters call the victims "Fallen Stars". UN Special Rapporteur for Myanmar Tom Andrews said the army was carrying out "mass murder" and called on the world to isolate the junta and block its access to weapons. But foreign criticism and sanctions imposed by some Western countries have failed to sway the generals, and neither have the daily protests. Senior General Min Aung Hlaing, the junta leader, said during a parade to mark Armed Forces Day on Saturday that the military would protect the people and strive for democracy. Countries including the United States, Britain, Germany and the European Union again condemned the violence. "It's terrible, it's absolutely outrageous," US President Joe Biden told reporters in Delaware. The EU's top diplomat, Josep Borrell, called on the generals to stand down from what he called a "senseless path" of violence against their own people. The top military officer from the United States and nearly a dozen of his counterparts said a professional military "is responsible for protecting - not harming - the people it serves". Do you like the content of this article?
Read More

Danish woman crashed on ATV during vacation in Thailand, insurance refused to cover...

ASIA/THAILAND - Appointment of the National Director of...