Thousands of cops on standby

More than 12,000 crowd control officers will be deployed to handle anti-government demonstrations planned in Bangkok this weekend. 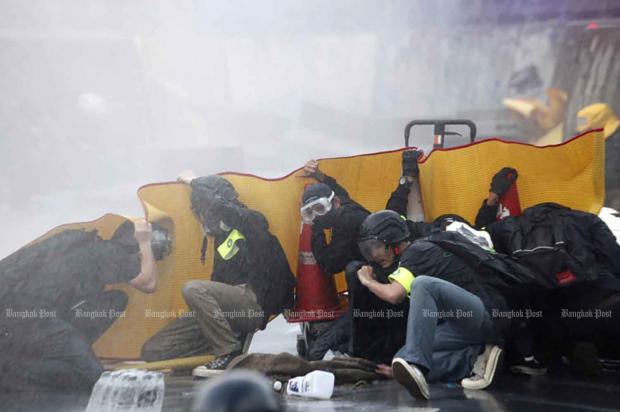 Thousands of cops on standby 19 Feb 2021 at 09:30 0 comments WRITER: GARY BOYLE ORIGINAL SOURCE/WRITER: POST REPORTERS Level switch: A group of anti-government demonstrators clash with riot police near parliament building who prevented them from reaching the building last November. (Photo by Wichan Charoenkiatpakul) More than 12,000 crowd control officers will be deployed to handle anti-government demonstrations planned in Bangkok this weekend. A Facebook page named "Mob Fest" on Thursday also posted a message urging supporters to rally outside parliament at 5pm on Friday. "We will watch a live broadcast of the no-confidence debate on a big screen," the page said. "We will yell at the government and debate on 10 urgent issues proposed by the people. Over the past seven years since Gen Prayut Chan-o-cha seized power, he has taken the people on a roller-coaster ride with a host of promises and it has all come crashing down." Parliament will vote on the opposition's no-confidence motion against Prime Minister Prayut and nine of his cabinet ministers on Saturday. The Facebook page of the United Front of Thammasat and Demonstration, which is part of the anti-government Ratsadorn (People's) Movement, announced on Thursday the group would hold a rally on Saturday, with the time and location to be announced on Friday. "There are two days to go before the deadline. People who champion democracy are requested to prepare for it," the group said. Arnon Nampa, a co-leader of the Ratsadorn Group, took to Facebook to urge demonstrators to avoid using violence when confronting authorities. He is being detained at Bangkok Remand Prison on a range of charges, including lese majeste . Police said on Thursday that 12 companies of 1,800 crowd control officers would be sent to handle protesters over the weekend. Police expect the protesters to gather at Democracy Monument and outside parliament . Vocabulary: champion : to publicly support a set of beliefs, political aims, or a group of people - สนับสนุน company : a group of soldiers or police that is usually divided into two or more smaller groups - กองร้อย lese majeste : the crime of offending, threatening or showing disrespect for a member of the royal family - หมิ่นพระบรมเดชานุภาพ mob (noun) : a large crowd of people, especially one that may become violent or cause trouble - ฝูงชนที่กำลังสับสนอลหม่าน, ฝูงชนวุ่นวาย motion : a formal proposal that people discuss and then vote on in a meeting or debate - ญัตติ, ข้อเสนอเพื่อการอภิปรายในที่ประชุม no-confidence debate (censure debate) : formally criticising a cabinet minister or the full cabinet in a parliamentary session after which members vote to support or reject the motion - การอภิปรายไม่ไว้วางใจ opposition : of a political party that is not part of the government or a group which is against the government - ฝ่ายค้าน  ผู้ต่อต้าน parliament : the group of people who are elected to make and change the laws of a country; the building where members of parliament meet. - รัฐสภา promise (noun) : a statement that tells somebody that you will definitely do or not do something - คำสัญญา, คำมั่นสัญญา seize (verb) : to take something using force - ยึด, จับกุม violence : physical force with the deliberate intention of causing damage to property or injury or death to people - ความรุนแรง, การใช้กำลังทำลาย yell : to say something in a loud voice, or to make a loud noise because you are angry, afraid, excited, or in pain - ตะโกน,ร้อง Do you like the content of this article? Like dislike 0 liked & 0 people disliked it RELATED STORIES Most Viewed Recent LEARNING Articles
Read More

Deadly ketamine cocktail has 3 other drugs