The pandemic that cancelled the Copa America... in 1918

SAO PAULO - "Rio is a giant hospital," screamed one headline. 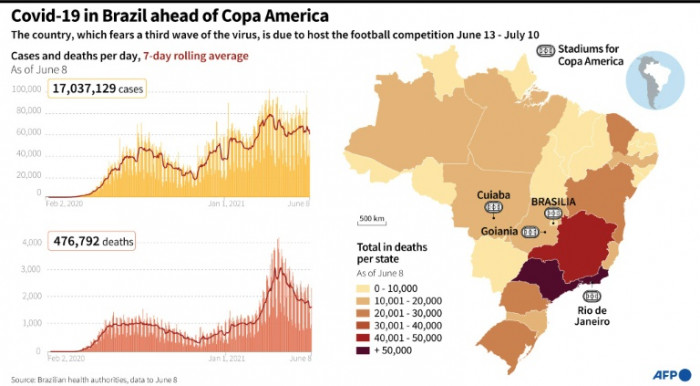 Sports The pandemic that cancelled the Copa America... in 1918 published : 11 Jun 2021 at 09:45 writer: AFP The Covid-19 pandemic in Brazil ahead of Copa America football tournament. SAO PAULO - "Rio is a giant hospital," screamed one headline. "No doctors, no medicine," said another. "Government criminally negligent," decried a third. With such damning words splashed in giant print across the front pages, Brazil decided it had little choice but to postpone the Copa America football tournament. No, not this year's highly controversial, Covid-19-battered event - the 1918 edition, which was called off over the Spanish flu. With the clock ticking down to the 1918 "South American National Teams' Championships," as the world's oldest-running international football tournament was then known, the planet was in the midst of a pandemic nightmare eerily similar to today's. A dangerous virus was wreaking havoc around the globe on its way to killing an estimated 50 million people in two years. The pandemic did not spare Brazil, which was due to host the tournament. With a month to go, the now-extinct Rio de Janeiro newspaper Gazeta de Noticias ran the headlines above. Except for the yellowed paper they are printed on, they could easily be mistaken for articles from the Brazil of 2021, where Covid-19 has claimed 480,000 lives, and far-right President Jair Bolsonaro stands accused of driving the death toll higher with his policies. Just days ago, the current Copa America, which opens Sunday, looked set to suffer the same fate as the tournament's third edition 103 years ago. Already postponed by 12 months because of the pandemic, its fate looked dire when original co-hosts Colombia and Argentina fell through because of violent anti-government protests in the former and a Covid-19 surge in the latter. But Bolsonaro gave his blessing last week for Brazil to stand in as emergency hosts -- despite the fact his country has the second-highest Covid-19 death toll worldwide and faces warnings of an imminent third wave. Epidemiologists, Bolsonaro opponents, and top players and coaches -- including the entire Brazilian national team -- criticised the decision. But Brazil's Supreme Court ruled Thursday the tournament could go ahead. The Brazil of 1918 was already starting its love affair with football. Just four teams -- instead of the 10 today -- were slated to take part in the continental championships in Rio de Janeiro: Brazil, Argentina, Chile and Uruguay. The opening match was scheduled for November 10, two months after Brazil detected its first case of the so-called Spanish flu. "It was terrifying to see the speed with which the virus spread and the number of people affected," wrote historian Pedro Nava, who himself lived through the pandemic in Rio. "The most terrible thing wasn't the number of lives lost, it was that there was no one to make coffins, to take them to the cemetary, to dig graves or bury the dead." The authorities initially refused to close the city's ports, reluctant to shut down the economy. They called on citizens to remain home, particularly at night, and many establishments shut their doors. Football, however, remained open for business well into the health crisis. Newspapers of the era report footballers playing sick. Others died of the disease, including British striker Archibald "Archie" French, of Fluminense, and Joao Cantuaria, star of Sao Cristovao. "Football only stopped when the death toll really hit a critical level," history professor Joao Malaia of Santa Maria Federal University told AFP. Rio recorded its first death in the pandemic one month before the tournament was due to begin. Two weeks from kickoff, the Brazilian Sporting Confederation asked for it to be postponed. From October to December that year, an estimated 65 percent of Brazil's 30 million people were infected with the virus. Rio, then Brazil's capital, registered 14,348 deaths. Sao Paulo, the economic capital, registered 2,000. "Many fell dead on the street, their faces pressed against the gutter. And that's where they stayed," wrote Nelson Rodrigues, one of Brazil's greatest authors and football columnists, in 1971. A Uruguayan official briefly pushed to bring the tournament to his home country to avoid economic losses for the teams. However, organisers ultimately postponed the tournament until May 1919, when the pandemic was starting to dissipate. Led by striker Arthur Friedenreich, Brazil won the first of its nine Copa America titles. Do you like the content of this article?
Read More

Golf isn't as demanding as we think

Pressure on No.1 Djokovic in final, says hot Medvedev

Immelman has blueprint for success