… cabinet. This act is critical to coordinate action on climate change across the Thai government … and to join the world in addressing its underlying causes. Given Thailand … benefits. Thailand has significant and … Thailand to become a … 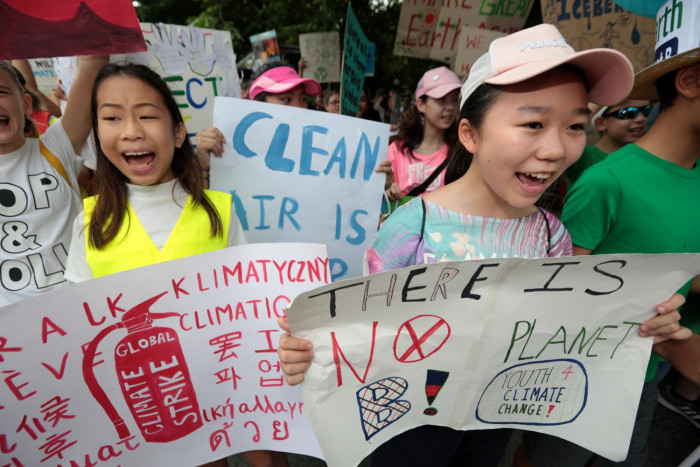 Opinion Thailand's key role in tackling climate emergency published : 5 Jun 2021 at 04:00 newspaper section: Oped writer: Brian Davidson Young people carrying placards highlighting their concerns about climate change march to the Natural Resources and Environment Ministry to urge the government to take action. (Photo: Chanat Katanyu) Friends and allies are coming together to support Thailand in taking bold action on climate change. Less than a year after Thailand experienced its worst drought in 40 years, forest fires wreaked havoc in Chiang Mai for the third consecutive year in 2021, contributing to toxic air quality. This is not a coincidence -- increased fires are just one example of how climate change is already impacting Thai people. In fact, Thailand is among the 10 countries most impacted by extreme weather events linked to climate change. As international partners of Thailand, we see the impacts here and around the world. In the Maldives, climate change represents an existential threat to the country; its impacts are already being felt across all economic and social sectors, but a sea level rise of even one metre would cause the loss of its entire land area. While the impacts of climate change are heightened for vulnerable nations such as the Maldives, no nation is immune from the climate crisis, and an urgent global effort is necessary to tackle it. Every country has an important role to play in this at the global level. The Intergovernmental Panel on Climate Change says we have only until 2030 to cut global greenhouse gas emissions by 45-50% and so limit global warming to 1.5C. Warming beyond this -- even half a degree -- will significantly worsen the risks of drought, floods, extreme heat and sea-level rise, and exacerbate poverty for hundreds of millions of people. Longer-term, the plan must be to achieve net zero emissions (i.e. the amount of emissions added to the global atmosphere is no more than what is taken out) between 2050 and 2070. Across the world over 110 nations, including our own, have committed to reach net zero emissions by 2050. The Maldives has actually committed to achieving net zero emissions by 2030 with adequate and sustainable support. Most recently in this region, South Korea, Japan and Laos have joined this commitment. China has committed to being net zero by 2060. Thailand is the 20th largest emitter of greenhouse gas emissions; what Thailand does nationally will echo globally. It has committed to cutting emissions by 20-25% by 2030 (compared to projected business-as-usual levels). Last year the country succeeded in meeting the Nationally Appropriate Mitigation Action goal of reducing emissions by 7-20%. As a higher middle-income country with strong leaders and plentiful resources, Thailand can set the standard for reducing emissions to embrace the many economic, health and social benefits of a low-carbon economy. Sectoral advances, such as Thailand's recent plans to increase use of renewable energy sources and produce and use more electric vehicles, are crucial in this transition. We congratulate Thailand on these steps. However, concerted climate action will also require a whole-of-society approach and cross-governmental coordination. In March, Thailand took a key step towards this when the National Climate Change Committee approved a draft of Thailand's first Climate Change Act for submission to the cabinet. This act is critical to coordinate action on climate change across the Thai government and to join the world in addressing its underlying causes. Given Thailand's achievements to date, we hope that Thailand will revisit its current 2030 target -- as many other countries have -- ahead of the COP26 global climate change negotiations in November. Much of the world has now answered the call for urgent greater collective action. Joining our countries and others in announcing a commitment to net zero emissions would also be a strong signal. We know that the country has the potential for this; for example, Thailand's rich endowment of forests and natural resources provides one of the most effective and cost-efficient ways for it to reach further on climate goals, while also promoting well-being. Decreasing the use of fossil fuels and increasing the share of renewable energy also have massive benefits. Thailand has significant and largely untapped potential for solar and bioenergy. Developing this will improve air quality, decrease energy dependency, lower energy costs and boost job creation. As partners, we are ready to assist Thailand in accessing global resources to meet any commitment it chooses to make. Thailand's Climate Change Act marks an important step towards action on climate change. We hope it will lead to further emissions reductions, allowing Thailand to become a regional leader in climate change mitigation and confirming its strong commitment to the 2030 Agenda and the Sustainable Development Goals. We look forward to continuing to support Thailand in these efforts. Brian Davidson CMG is UK Ambassador to Thailand, Lorenzo Galanti is Ambassador of Italy to Thailand, Michael Heath is Charge d'Affaires of the US Embassy in Thailand, Mohamed Jinah is Ambassador of the Republic of Maldives in Thailand, Thierry Mathou is Ambassador of France to Thailand, Renaud Meyer is the UNDP Resident Representative to Thailand, Kees Rade is Ambassador of the Kingdom of the Netherlands to Thailand, Georg Schmidt is Ambassador of Germany to Thailand and Pirkka Tapiola is the EU Ambassador to Thailand. Keywords global warming Do you like the content of this article? (6)
Read More