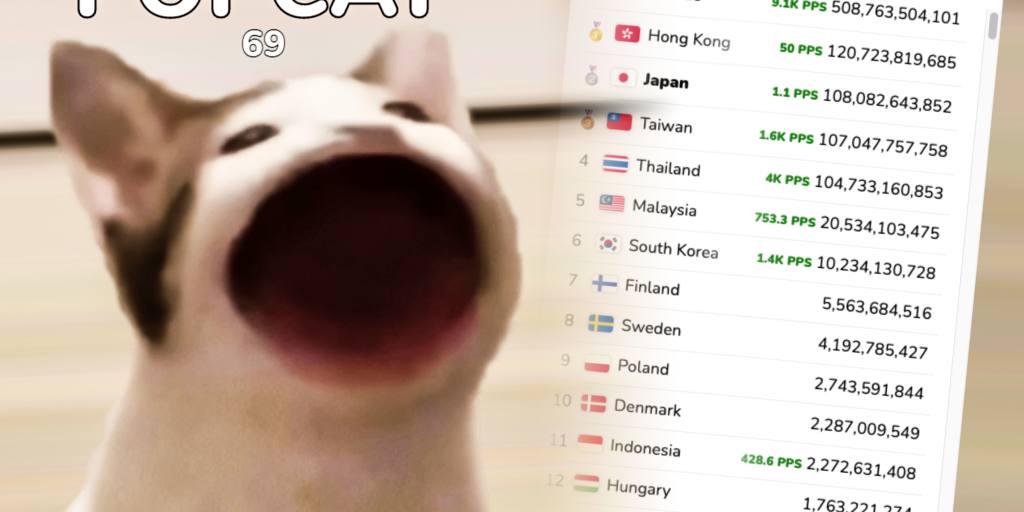 BANGKOK -- People in Thailand lately have been obsessed with regaining the world's top position in the online game Popcat. Thailand took the global No.1 ranking shortly after the game started catching on there in mid-August. Companies are placing Popcat-related ads on social media to capitalize on its popularity. The simple game seems to appeal to the public because for a little while it takes people's minds off the pandemic at a time when Thailand is in a de facto lockdown due to spreading infections.

Popcat is free, available on the site. It was created by three students at the University of Sheffield in the U.K. in December 2020 and has grown popular in some countries and regions.

The game is a no-brainer. All you need to do is tap an image of a cat. Each time you tap, the cat opens its mouth widely and makes a popping sound. Each tap is counted as a point.

One main feature of the game is that it shows a ranking of countries based on their players' total number of taps. After Popcat started catching on in Thailand, the number of players increased so quickly that Thailand went to the top spot on Aug. 15, beating Taiwan and Malaysia. But on Aug. 25, Thailand slipped to third, with Hong Kong on top and Taiwan second. Japan also moved up to fourth.

The Thai public broadcasting service Thai PBS has said the game seems to give Thais a small sense of achievement that helps boost morale in a time of despair. The Bangkok Post newspaper has described Popcat as uniting Thailand.

Avid players have been sharing tips on the internet to maximize taps. One said, "It's possible to tap nearly 1,000 times in a minute if you use both hands." Some people even share hacks such as how to write code that automates tapping. The total number of taps made in Hong Kong has already topped 120 billion, and Thailand is in a rush to catch up.

Some companies are trying to benefit from Popcat fever by tying it to ads on social media. Major Cineplex Group, a leading Thai movie theater operator, has run an ad that encourages audiences to take a popcorn break when playing Popcat. Thai retail giant Central Group uses a Popcat-like image in advertising its brand of cat food on social media.

While Popcat players in Thailand are working hard to become the world's No. 1 again, they seem to have developed a sense of solidarity with fellow gamers in Hong Kong and Taiwan.

In Thailand, the number of people newly infected with COVID-19 totals almost 13,000 per day, and there is no sign of infections subsiding anytime soon. The number of the unemployed is increasing due to an economic downturn. The unemployment rate rose to 1.96% in the January-March quarter from levels of between 0.5 and 1.0 before the pandemic.

One Thai woman said, "People often joke about how Thailand was able to become the world's No.1 overnight because there are so many people who have plenty of time on their hands, as they have lost their jobs." One cynic commented on the internet, "Thai people have become good at clicking superfast, as they are busy applying for government aid and registering for a vaccination program."

The Bangkok Post said, "It's a silly win but since we don't have much to be happy about lately, we'll take it," referring to Thailand's gaining the "gold medal" in Popcat. With income inequality and the generation gap widening amid the continued economic downturn, a small sense of achievement and solidarity created through the online game seems to help Thais vent pent-up emotions.

Pattaya City hot and cloudy, sudden heavy rain in most...

Two British prisoners sent home from Thailand do NOT have...