Loma Lookboonmee has been fighting for about as long as she can remember, but the rising UFC strawweight star has revealed that the one battle she is still yet to win is the one she wages with herself, every time she steps into the cage. 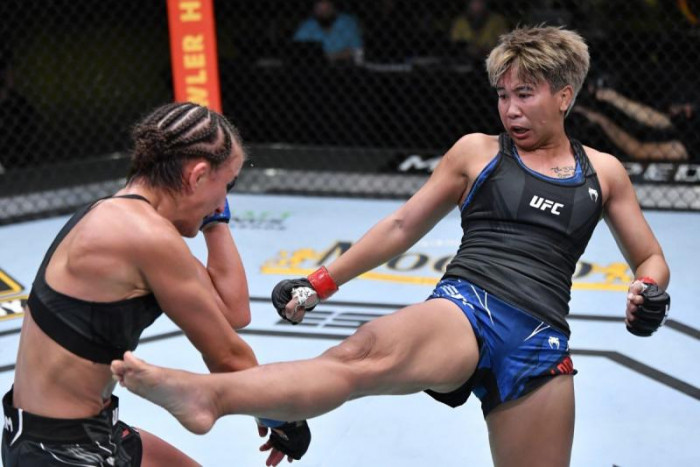 Loma Lookboonmee has been fighting for about as long as she can remember, but the rising UFC strawweight star has revealed that the one battle she is still yet to win is the one she wages with herself, every time she steps into the cage.

"My greatest adversary is myself," said the only Thai fighter there is on the UFC's books. "I'm my own worst enemy because I think too much."

The 25-year-old Loma (6-2) has recently started working with a sport psychologist, having so far relied on a natural affinity for the fight game.

That talent took her to multiple world titles across a Muay Thai career which started when she was about seven years old, before she landed in the UFC and carved herself a record so far of 3-1.

The surprise for those who have followed Loma's rise might come when she admits sometimes finding herself losing focus during fights, or even looking too far ahead, instead of getting on with the business at hand. From the outside looking in, she has always appeared a fighter whose head is exactly where it needs to be - but it seems that's not the case.

"A little bit of overthinking isn't too bad because it keeps me on my toes," Loma said. "But the big thing the sports psychologist is working on is to not think so much about the outcome of the fight, but to focus more on my performance and some of the things I have to do during the fight.

"I am learning to deal with how my mind works and think about what I need to think about."

Just what a fully focused Loma can do is an exciting prospect as she prepares to return to the Octagon to face Mexico's Lupita "Loopy" Godinez (6-2) at this weekend's UFC Fight Night 198 in Las Vegas.

With each outing in the UFC so far, Loma has grown in terms of the skill set she displays. There were four takedowns last time - on her way to a unanimous decision win over American Sam Hughes (5-3) in May - as well as the signature power in the clinch, and the elbows, that took her to the very top of Muay Thai.

But Loma believes there remains plenty of work still to do, as she expands her repertoire from its stand-up base.

"I wasn't that impressed," Loma said of her last win. "I was just thinking too much, and I was hesitating, but that has definitely made me train a lot harder for this fight. I was happy with the takedowns because they weren't actually part of the plan.

"I just grabbed hold of her and it was an instinct to just trip her. It's good that I have that instinct and it felt very natural to me. But I still have work, and I still have to show my full power."

The 28-year-old Godinez is a late call-up to this bout, agreeing only last Wednesday to replace the indisposed American Cheyanne Buys (6-2), and will be grabbing a little slice of UFC history with what will be a record third fight in 42 days.

Godinez is coming off a loss up at flyweight - via unanimous decision to Brazil's Luana Carolina (8-2) - but has shown across three fights (1-2) with the promotion so far that she loves a scrap and - quite obviously - any opportunity to do just that.

For Loma, though, the opponent change seems of little concern. For this fight camp she has been locked away with long-time mentor George Hickman, who is about to open his own Bangtao MMA gym on the Thai island of Phuket, having moved on from the talent factory that is Tiger Muay Thai.

"George has been on to me every day about everything," Loma said. "It has been a great fight camp. It doesn't matter to me how many times they change my opponent because I know I have done everything I have to do. I know now that it is just up to me to go out there and fight the way I know I can fight."

Asia's World Cup qualifiers set to be postponed until June