Thailand';s Loma Lookboonmee is … strawweight, who remains the only Thai fighter in history to compete … ," she said of her Thai foe." I cannot be … 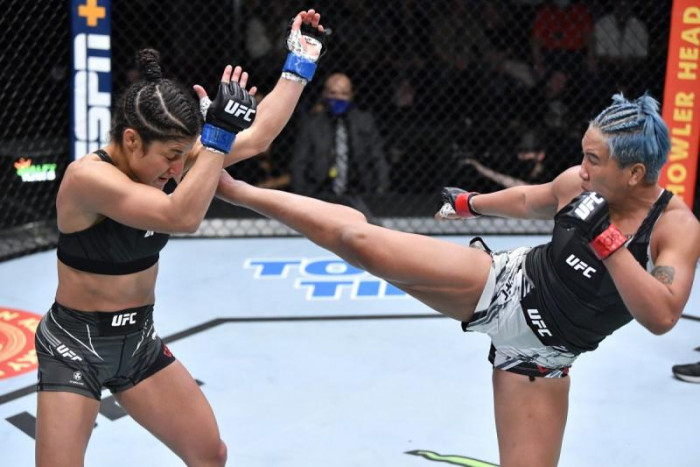 Thailand's Loma Lookboonmee is back in the loss column after a defeat against Mexico's Lupita "Loopy" Godinez on the undercard of UFC Fight Night 198 on Saturday in Las Vegas.

The 25-year-old strawweight, who remains the only Thai fighter in history to compete in the UFC's Octagon, was originally slated to battle Cheyanne Buys on the event inside the UFC Apex facility, but was matched up with Godinez on short notice when Buys tested positive for Covid-19.

Unfortunately for Loma, Godinez made the most of the short-notice opportunity, using a wrestling-heavy game plan to capture a unanimous decision victory after three rounds of action.

The loss marks the end of a two-fight win streak for Loma, who was riding a pair of decision triumphs over Jinh Yu Frey and Sam Hughes. She now has a 6-3 overall record and a 3-2 mark in the Octagon.

Godinez, meanwhile, is now 7-2 overall and 2-2 in the UFC. On the surface, her .500 Octagon record might not look like much, but all four of those bouts occurred this year, and three of them have been shoehorned into the past two months.

Since Oct 9, the Mexican prospect has submitted Silvana Gomez Juarez, given up a decision to Luana Carolina, and now beaten Loma -- not bad for a few weeks of work.

After her win over Loma, she seems to be happy with the way things are going.

"It's been so amazing," Godinez told UFC News backstage after her victory. "People support me so much - my teammates, my team, my family. I'm so happy, I'm in a really great spot in my life right now and I want to keep it going. I'm so happy and I couldn't ask for a better life right now. I'm living the dream."

"I was looking for the finish but she did a great job defending," she said of her Thai foe." I cannot be upset about that, I'm competing with the best of the best in this organisation."

How the Boutique Hotel Industry Views Its Future, According...

Japan easing entry limits for Thailand, Vietnam and 2 other...

Thailand and Taiwan will open up to Italian apples