GENEVA - Switzerland voted Sunday on whether to ban full facial coverings in public places, with the result on a knife-edge, according to early projections. 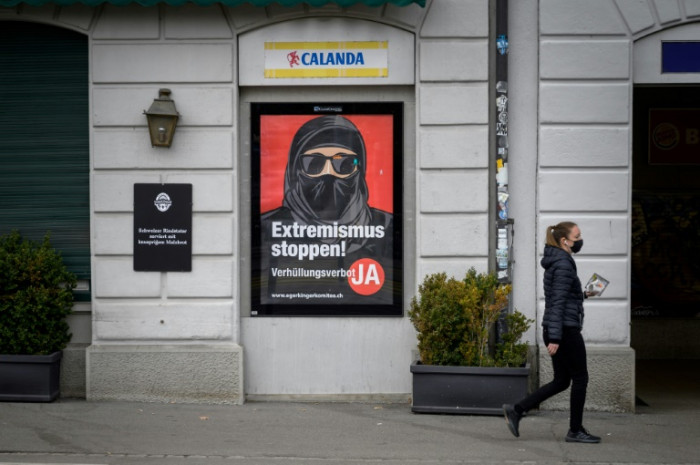 World Swiss 'burqa ban' vote on a knife-edge published : 7 Mar 2021 at 19:45 writer: AFP While the referendum proposal does not mention Islamic veils, it is clearly directed at the burqa GENEVA - Switzerland voted Sunday on whether to ban full facial coverings in public places, with the result on a knife-edge, according to early projections. After the polling stations closed at midday (1100 GMT), public broadcaster SSR and pollsters gfs.bern both projected that 51 percent had voted in favour of the ban. In parallel votes, a trade deal with Indonesia seemed set to be narrowly accepted, while a plan for a state-backed electronic identity looked on course to be rejected, according to projections. The so-called anti-burqa vote comes after years of debate in Switzerland following similar bans in other European countries -- and in some Muslim-majority states -- despite women in Islamic full-face veils being an exceptionally rare sight in Swiss streets. Even though the proposal "Yes to a ban on full facial coverings" did not mention the burqa or the niqab -- which leaves the eyes uncovered -- there was no doubt as to what the debate was about. Campaign posters reading "Stop radical Islam!" and "Stop extremism!", featuring a woman in a black niqab, have been plastered around Swiss cities. Rival posters read: "No to an absurd, useless and Islamophobic 'anti-burqa' law". The ban would mean that nobody could cover their face completely in public -- whether in shops or the open countryside. But there would be exceptions, including for places of worship. A 2019 Federal Statistical Office survey found that 5.5 percent of the Swiss population were Muslims, mostly with roots in the former Yugoslavia. - Double majority needed - The government and parliament opposed a nationwide ban. Their counter-proposal -- automatically triggered if the initiative is rejected -- would require people to show their faces to the authorities if necessary for identification, such as at borders. Under Switzerland's system of direct democracy, any topic can be put to a national vote as long as it gathers 100,000 signatures in the wealthy country of 8.6 million people. Rounds of votes take place every three months. A 2009 vote that banned the construction of minaret towers on mosques sparked anger abroad. To pass, initiatives require support from a majority of voters nationwide, and from a majority of federal Switzerland's 26 cantons, six of which count as half-cantons in votes. After the first four cantonal results, 53 percent backed the burqa ban. - Indonesia trade, e-ID votes - Two other votes were held on Sunday. One was on the free trade agreement struck between Switzerland and Indonesia. Tariffs would be gradually removed from almost all of Switzerland's biggest exports to the world's fourth most populous country, while the Swiss would abolish duties on Indonesian industrial products. Opponents, who are especially critical of Bern's move to reduce import duties on palm oil, successfully secured a popular vote on the deal. But SSR and the gfs.bern institute projected that voters had narrowly given the trade deal the green light. The other vote was on a government plan to introduce a federally recognised electronic identity that could be used for ordering goods and services online. The idea is that the e-ID would be regulated by law, offering a degree of security and reliability when giving identity details on the internet. It could also be used to open a bank account or request an official document. It was pushed to a popular vote by critics alarmed at the plan to rely on private firms for the IDs, giving them access to sensitive, private information. SSR and gfs.bern said the plan seemed set to be comfortably rejected. Do you like the content of this article?
Read More

US to reduce troops in Iraq 'over coming months'