The government is mulling a faster rollout of the fourth phase of the “Khon La Khrueng” co-payment subsidy scheme to stimulate spending. 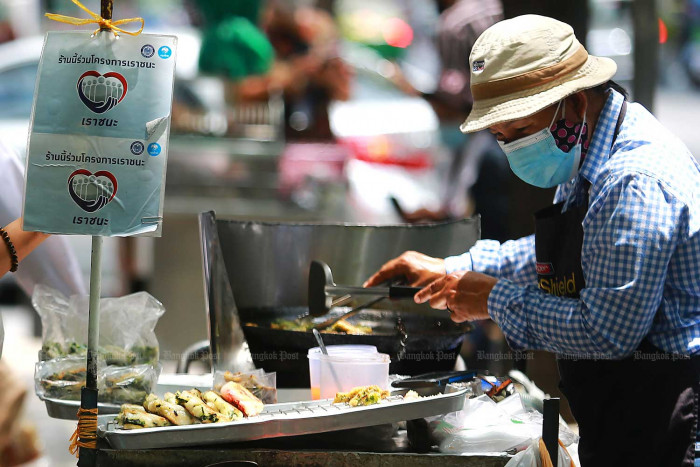 The government is mulling a faster rollout of the fourth phase of the “Khon La Khrueng” co-payment subsidy scheme to stimulate spending.

On Dec 21 last year, the cabinet approved in principle the fourth phase of the co-payment subsidy after the third phase expired at the end of 2021.

The fourth phase is scheduled to run between March and April this year.

Deputy Finance Minister Santi Promphat said he has been in talks with related state agencies on the matter.

The co-payment scheme sees the government subsidising 50% of food, drink and general goods purchases for participants.

The total subsidy is limited to 150 baht per person per day.

Four state stimulus schemes meant to mitigate the impact of the pandemic expired on Dec 31, 2021. One was the third phase of the programme providing additional cash handouts to state welfare cardholders.

The other three comprise the scheme to provide additional cash handouts to those in need of special assistance, the third phase of the Khon La Khrueng scheme and the “Ying Chai Ying Dai” (the more you spend, the more you get) scheme.

Of total spending, 114 billion baht was spending by participants, with the remainder the state subsidy.

The Ying Chai Ying Dai scheme saw 91,951 participants exercising the right under the scheme out of 490,000 eligible registrants. Their total spending stood at 3.82 billion baht.

The scheme provides users with cashback e-vouchers for purchases, encouraging people to purchase food, products and services at participating shops.

In a related development, Mr Supattanapong said the government also pledged to implement other measures to bolster consumption such as the measure to boost electrical vehicle purchases sometime this year.

He said the government also aims to manage inflation within a target framework of 1-3% this year.

“The government and the Bank of Thailand are closely monitoring inflation. If the inflation rate is close to 3%, the government is set to organise an emergency meeting attended by all related agencies to harness its pressure,” he said.

However, the deputy premier admitted the government is concerned about the continued increase in prices of goods, promising the administration will try its best to curb the sharp rise.

“Higher inflation is linked to global trends which sees higher demand of consumption and recovery of the global economy,” he said.

“The Covid-19 pandemic has led investors to push back their investment, resulting in shortages of certain products. The situation is expected to improve once the infections of the Omicron variant ease.”

5G a boon for tourism, healthcare