Water splashing will probably be allowed during the Songkran festival next month, Culture Minister Itthiphol Kunplome said on Tuesday. 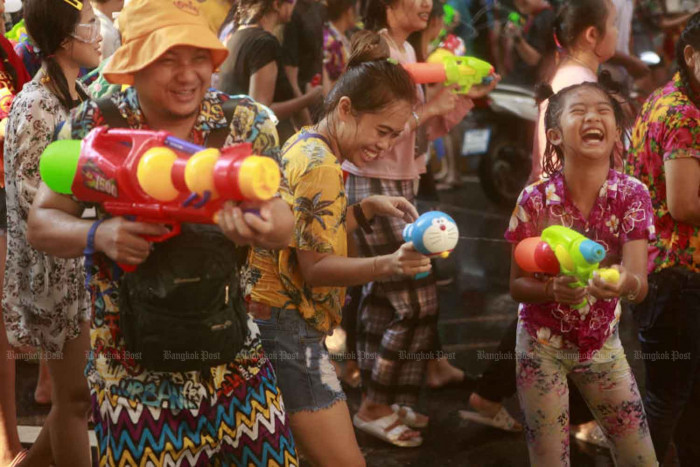 Thailand General Songkran water splashing likely to be allowed published : 9 Mar 2021 at 14:06 writer: Mongkol Bangprapa Water guns and splashing are a normal part of Songkran, but were not allowed last year because of the Covid-9 pandemic. The culture minister said on Tuesday it will probably be allowed this year, during the festival next month. (Photo: Pornprom Satrabhaya) Water splashing will probably be allowed during the Songkran festival next month, Culture Minister Itthiphol Kunplome said on Tuesday. It should get the green light because the daily number of new Covid-19 cases had dropped from three digits to only two digits, the minister said. He also thought it possible people travelling around on trucks and splashing water on roads would be allowed. "Celebration activities will be considered. For now, it is not prohibited," Mr Itthiphol said. Officials were focusing more on ways to limit the number of participants in Songkran events. "We are paying more attention to the number of people at event venues... We will find a balance between helping the economy and the prevention of new clusters (of Covid-19) which would spread the disease in communities," the culture minister said. People would be advised to observe social distancing when giving traditional greetings to elderly people during the Thai New Year. Event organisers would also be asked to ensure social distancing. Chairs could be arranged for participants, Mr Itthiphol said. Detailed measures for the Songkran festival would be presented to a sub-committee of the Centre for Covid-19 Situation Administration on Thursday, he said. The chairman of the CCSA sub-committee, Gen Nattaphol Nakpanich, said on Tuesday the Culture Ministry would work out how the Songkran festival should be organised. The secretary-general of the National Security Council said the ministry was likely to propose suitable measures. The government, the public, businesses and event organisers were by now familiar with Covid-19 control measures, Gen Nattaphol said. Songkran is from Apri 13-15 this year. Do you like the content of this article? (9)
Read More

Japan to give B1.3 bn vaccine aid to Thailand, 24 other Asian nations