Covid-19 is raging in Greater Bangkok, including several crowded communities in the capital, and infections were partly linked to visits to pubs and Songkran travel, according to the Centre for Covid-19 Situation Administration. 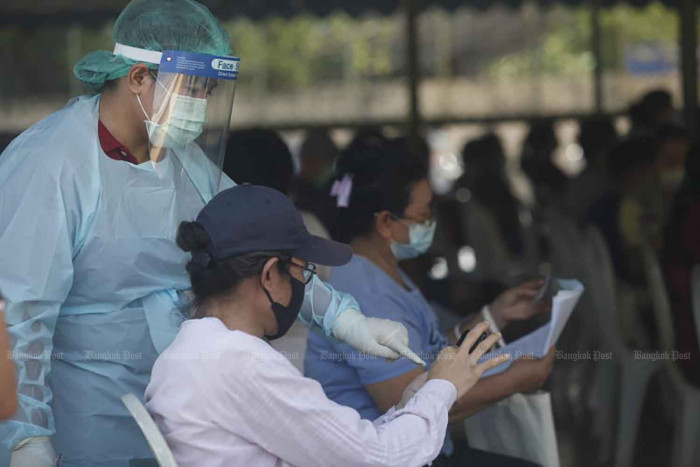 Thailand General Serious Covid situation in greater Bangkok published : 4 May 2021 at 15:21 writer: Online Reporters A health worker gives advice to a woman waiting for a Covid-19 test at the Bon Kai youth centre in Pathumwan district of Bangkok on Tuesday as the government has detected a big cluster of Covid-19 cases that worsened the outbreak situation of Greater Bangkok. (Photo: Nutthawat Wicheanbut) Covid-19 is raging in Greater Bangkok, including several crowded communities in the capital, and infections were partly linked to visits to pubs and Songkran travel, according to the Centre for Covid-19 Situation Administration. Taweesilp Visanuyothin, spokesman for the Centre for Covid-19 Situation Administration, said on Tuesday that from April 28, the number of Covid-19 cases in Greater Bangkok surpassed those in 73 provinces combined. He cited 956 cases in Greater Bangkok and 794 in 73 other provinces over the past 24 hours. "If we are able to cope with the situation in the greater Bangkok, we can handle most of the spread in the whole country. Disease control efforts are now focused on the spread in each district in Greater Bangkok," he said. According to him, new Covid-19 cases were detected in seven communities in Lumpini and Pathumwan sub-districts in Bangkok's Pathumwan district. From April to May 3, there were 96 Covid-19 cases in the communities — 61 in Pattana Bonkai community, 14 in Kheha Bonkai, 10 in Polo, eight in Phra Jen, two in Ruam Ruedee and one in Kularb Daeng. Another 66 people living elsewhere in the area, including condominiums, housing estates and dormitories, were also infected during the same period. Infections in the areas started on April 7. The number slowed down briefly before soaring just after the Songkran holiday, Dr Taweesilp said. The first Covid-19 case in the areas was detected in a poverty-stricken crowded community and linked to a visit to an entertainment place. Before the infection was detected, there had been parties with friends. The disease was then passed to family members and groups of friends in other communities. "It is necessary to quickly find infected people and separate them from others... Mass testing is expected to cover about 1,000 people a day. Please cooperate with the tests," Dr Taweesilp said. The spokesman also mentioned the Covid-19 spread in communities of Si Yaek Mahanak sub-district in Bangkok's Dusit district. As many as 80 Covid-19 cases were confirmed at three poverty-stricken communities in the sub-district. Of them, 73 were in Wat Yuan-Klong Lampak community, five in Lang Ban Manangkhasila community and two in Rim Thang Rod Fai Sai Paed Riew community, he said. According to the spokesman, infection there started on April 9 and also surged after the Songkran holiday. It began with three clusters. One was linked to visits to pubs in Ratchadaphisek area on April 7-8 and infections were confirmed on April 14-15. The second cluster covered company employees who went to the Rama II area and infections were confirmed on April 16. The third cluster was a group of friends staying on rafts in Kanchanaburi province. On April 21, mass testing was done on 447 people, 22 of whom tested positive. Wat Yuan-Klong Lampak housed 856 people and would be a strategic area of Covid-19 fights, Dr Taweesilp said. Another big cluster was in Samut Prakan province adjacent to Bangkok. The spokesman said 160 people at a factory and a nearby community in Phra Samut Chedi district tested positive on Monday and Tuesday. A Myanmar employee there fell sick first on April 17. He then spread the disease to colleagues and their relatives. Nine people living near the factory contracted the disease. Of 323 workers at the factory, 151 or 46.8% were infected, Dr Taweesilp said. The Centre for Covid-19 Situation Administration set up a command centre exlusively to fight Covid-19 in Greater Bangkok and the prime minister headed the centre, the spokesman said. Do you like the content of this article? (31)
Read More