Samut Prakan in the way for flying Pathum 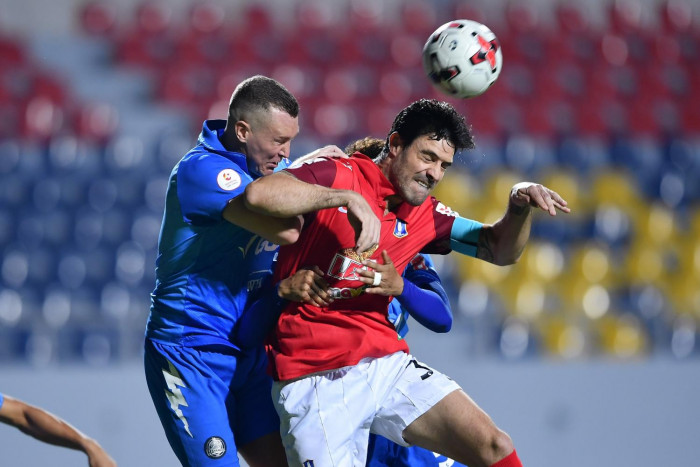 Sports Samut Prakan in the way for flying Pathum Flying BG face in-form Samut Prakan published : 27 Feb 2021 at 04:00 newspaper section: Sports writer: Tor Chittinand BG Pathum's Andres Tunez, right, in action against Rayong in Thai League 1 on Thursday. PR Thai League 1 leaders BG Pathum United face a tough test at in-form Samut Prakan tomorrow to maintain their unbeaten record. The Rabbits are running away with the title as they enjoy a 19-point advantage with eight games remaining. However, they will surely want to claim their maiden T1 title in style without defeat. Pathum are likely to welcome back veteran strikers Diogo Luis Santo and Teerasil Dangda, who were rested in the team's 1-0 win at Rayong on Thursday. Adres Tunez will marshal BG's gritty defence which has conceded only 11 goals in 22 league matches. Fifth-placed Samut Prakan are still in contention for a top-three finish and a place in the 2022 AFC Champions League play-offs. They have enjoyed a good run with four wins and one draw in their last five matches. During that spell, they beat Muang Thong United 4-2 and hammered Prachuap 4-0. Meanwhile, Buriram United travel to Nakhon Ratchasima for a northeastern derby today. Alexandre Gama's men defeated champions Chiang Rai United 1-0 in midweek to move up to second. Nakhon Ratchasima must keep a close eye on Buriram forward Supachok Sarachart who has scored five goals in the last three matches. But the Thunder Castle will be without Digao, Samuel Rocha, Aung Thu and Korrakot Wiriyaudomsiri who are all injured, and Thinakorn Asurin who is suspended. Meanwhile, third-placed Port have a good chance to end their winless run when they host bottom club Rayong tomorrow. Port have suffered four losses and got only one point -- against relegation strugglers Trat -- in the last five games. Although Port chairwoman Nualphan Lamsam said she would not sack coach Sarawut Treephan after the latest setback this week, critics believe anything less than a win would lead to the end of Sarawut's tenure at the Klong Toey-based club. Do you like the content of this article?
Read More

Airlines get nod to transit

Overseas fans likely to be barred from Tokyo Games