The Court of Arbitration for Sport (CAS) has allowed the Kingdom, which has been suspended for doping, to return to international competitions after June 18, the Thai Amateur Weightlifting Association (Tawa) said yesterday. 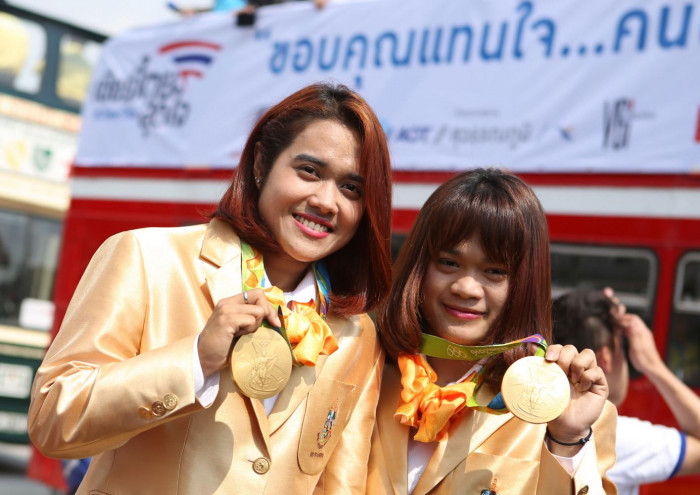 Sports Ruling opens doors for return published : 13 Apr 2021 at 04:00 newspaper section: Sports Sopita Tanasan, left, and Sukanya Srisurat with their 2016 Olympic gold medals. Jiraporn Kuhakan The Court of Arbitration for Sport (CAS) has allowed the Kingdom, which has been suspended for doping, to return to international competitions after June 18, the Thai Amateur Weightlifting Association (Tawa) said yesterday. According to the court's 52-page ruling dated April 8, Thai athletes can take part in events sanctioned by the International Weightlifting Federation immediately if Tawa pays the IWF US$200,000 (6.3 million baht), said Niphon Limboonsuebsai, chairman of Tawa's committee on international law. However, Thai weightlifters are still not allowed to participate in this year's Tokyo Olympics, which has been postponed from last year, Niphon told a press conference. Tawa has been banned from organising international events and taking part in IWF activities until April 1, 2023. The CAS says the ban on the national association will now end on March 7, 2022 provided that Tawa pays the IWF another $200,000, Niphon said. "We have received 'mercy' from the CAS and we accept the ruling," Niphon said. "We have learned a lesson and will prevent a recurrence of such a matter." Tawa and its athletes were initially suspended on March 7, 2019 after eight of the association's weightlifters -- including 2016 Rio Olympic champions Sukanya Srisurat and Sopita Tanasan -- tested positive for banned substances at the 2018 world championships. In a ruling last year, the IWF said Thai athletes are banned from participating in international competitions for an additional 11 months starting after the next IWF event whenever it takes place. Tawa, now led by Prachya Keeratinan, then lodged an appeal with the CAS. There have since been no IWF tournaments. Weightlifting is Thailand's most successful sport at the Olympics with five gold medals, followed by boxing with four. Weightlifting's future as an Olympic sport is at risk due to corruption and doping. Last June, Canadian law professor Richard McLaren said an investigation found that the IWF was rife with corruption. This included vote buying, doping cover-ups and $10.4 million in cash that cannot be accounted for, he said. Do you like the content of this article?
Read More

Nadal ready to perform for 'suffering' fans around the...