Chinese-owned, Hong Kong-based developer Risland Thailand will take a wait-and-see approach on the Thai property market this year, but aims to have presales growth of 10%, driven by existing condo inventory. 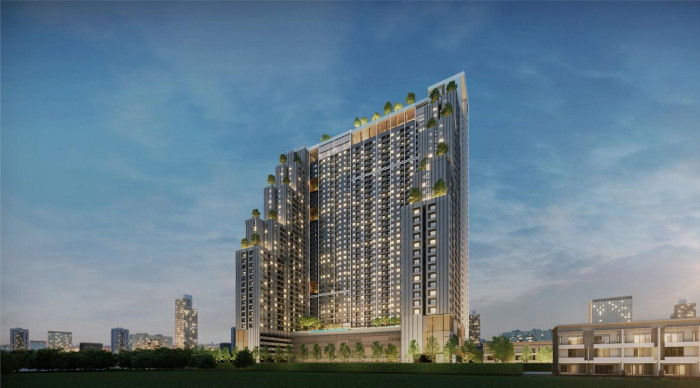 Business Risland bides time on launches published : 2 Mar 2021 at 05:38 newspaper section: Business writer: Kanana Katharangsiporn A digital rendition of Livin Ramkhamhaeng, a Risland project worth 4.9 billion baht. Chinese-owned, Hong Kong-based developer Risland Thailand will take a wait-and-see approach on the Thai property market this year, but aims to have presales growth of 10%, driven by existing condo inventory. Paul Nie, the company's regional sales and marketing general manager, said on Monday the Thai property market will recover this year as vaccines became available and are being distributed to target groups. "The market will improve from last year but will be unlikely the same level as 2018, one of the best years for the condo sector," he said. The company will have no new projects launched in the first half of 2021 as it will spend time conducting a market feasibility study. It will monitor the situation in the second half of this year before launching new projects. Since 2018, the company's first year in Thailand, it has launched 2-3 new projects worth around 7 billion baht per year. Presales last year were 7.44 billion baht, up 15% from 2019. Risland expected to have around 8 billion baht in presales by the end of 2021. Despite the possibility of no new projects being launched this year, the company will continue selling condo inventory and launch new development phases under its existing projects. One of them is Livin Ramkhamhaeng condo project worth 4.9 billion baht, with 70% of all units remaining unsold last year, which were worth 3.6 billion baht. He said the Ramkhamhaeng area will be a popular location for condo demand as there will be three new mass transit lines passing through it in the future. They will comprise the Orange Line from Minburi to Thailand Cultural Center, the Yellow Line from Lat Phrao to Samut Prakan and the Brown Line from Nonthaburi Civic Center to the Lam Sali intersection. As of the end of 2020, an outstanding condo supply in the location stood at 25,900 units, of which 40% were sold. The sales rate was down from 50% as there were units returned from buyers to developers after buyers were unable to get units transferred. This year there will be at least four new condo projects in the pipeline in the Ramkhamhaeng area, with a total of 1,824 units. Mr Nie said the company will continue to freeze plans to launch a mixed development of residential and hotel projects in Phuket as the tourism sector melted down. "We earlier planned to launch the Phuket project in the second half of this year," he said. "But the tourism sector and Phuket market remain sluggish. We will delay the launch to 2022 or later." He added the Phuket property market will improve if fit-to-fly health certificates for travellers to Thailand become effective. Do you like the content of this article?
Read More

ONE.SIX Development Is Bringing A New Perspective To Thailand...

VIDEO: Coldwell Banker Sea Property named as one of Thailand’s...