A Covid-19 outbreak in Bangkok’s Klong Toey district has prompted the government to speed up its vaccination rollout there. 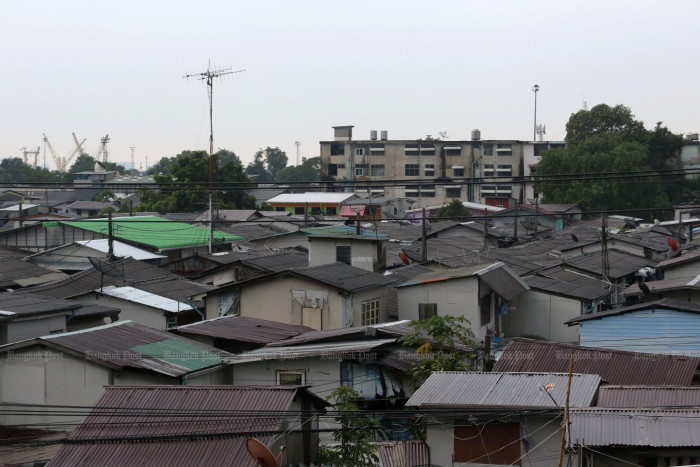 Learning Easy news Red alert published : 4 May 2021 at 08:24 writer: R May ORIGINAL SOURCE/WRITER: Post Reporters Bangkok's Klong Toey district, where a surge in Covid-19 infections has sparked fears of a super-spreader hub. Wichan Charoenkiatpakul A Covid-19 outbreak in Bangkok’s Klong Toey district has prompted the government to speed up its vaccination rollout there. The infection cluster in the slum community has given rise to fears of widespread transmission that could overwhelm the public health system if left unchecked. The cluster has sparked concern as thousands of people live in the tightly packed residential area, many of them commuting across Bangkok and to nearby provinces. Speaking after a meeting of the Centre for Covid-19 Situation Administration (CCSA) on Monday, Bangkok governor Aswin Kwanmuang said Prime Minister Prayut Chan-o-cha had stressed an urgent need to administer vaccine doses to community residents. Vaccinations will begin at Tesco Lotus hypermarket's Rama IV branch and Klong Toey Withaya School at 1pm on Tuesday, Pol Gen Aswin said. About 1,000 people are expected to be inoculated by the end of the day and a further 2,000 to 3,000 in the coming days. Proactive mass testing will also be conducted on 1,000 people in Klong Toey communities every day from Tuesday to May 19. By that time, about 20,000 out of 85,000 to 90,000 community residents are expected to have been tested, the governor said. He admitted that it would be more difficult to seal off Klong Toey communities than at the previous infection cluster in Samut Sakhon, which covered a limited area and comprised a smaller population. Search Copy Vocabulary administer (verb) : to give drugs, medicine, etc. to somebody - ให้ (ยา), จ่ายยา cluster : group of people, animals or things close together - กลุ่ม give rise to (verb) : to cause something to happen or exist - ทำให้เกิด hypermarket : a very large supermarket, usually built outside a town, that sells a wide range of goods - ห้างสรรพสินค้า inoculate : to treat a person or animal with a vaccine to produce immunity against a disease - proactive : taking action and making changes before they need to be made, rather than waiting for problems to be developed - อย่างมั่นใจ. ซึ่งเข้าควบคุมสถานการณ์, seal off (verb) : to prevent people from entering or leaving an area or building - ปิด ห้ามไม่ให้เข้า slum (n) : an area of a city that is very poor and where the houses are dirty and in bad condition - stress : to emphasise something such as an idea, fact or detail; to explain why something is important - เน้น widespread : happening or existing in many places, or affecting many people - อย่างแพร่หลาย Do you like the content of this article?
Read More

Government under fire over weapons budget