Rahm grinds his way into title hunt at US Open

LA JOLLA, United States: Jon Rahm grinded his way into contention Friday at the US Open, sinking clutch par putts and answering bogeys with quick birdies on a Torrey Pines layout he called a monster. 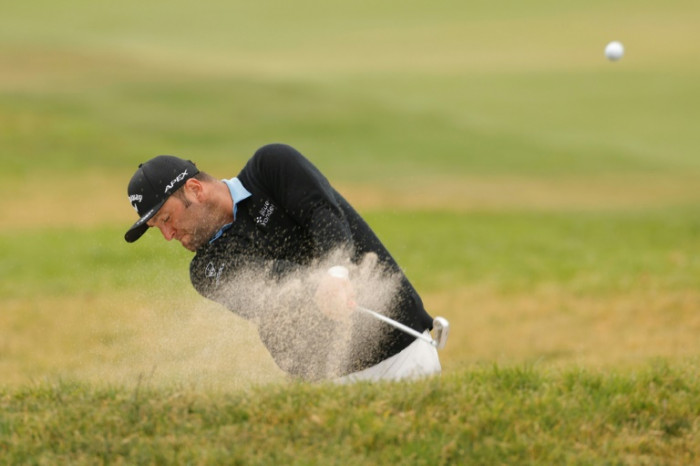 Rahm grinds his way into title hunt at US Open

Spain's Jon Rahm blasts out of a bunker during Friday's second round of the US Open at Torrey Pines, where the world number three grinded out a one-under par 70.

LA JOLLA, United States: Jon Rahm grinded his way into contention Friday at the US Open, sinking clutch par putts and answering bogeys with quick birdies on a Torrey Pines layout he called a monster.

World number three Rahm sank an eight-foot birdie putt at the 18th hole to fire a one-under par 70 and stand on three-under 139 for 36 holes at the oceanside course.

"Today it was the opposite. Took me a while to get going, didn't hit my second fairway until the 13th hole and I just had to survive."

Rahm stumbled with bogeys at the fifth and par-5 13th holes but made birdies at the sixth and 14th in response before his closing birdie.

But the 26-year-old Spaniard, chasing his first major triumph, pointed to a crucial start to the back nine with par putts from outside 14 feet at the 10th, just inside eight feet at the par-3 11th and almost six feet at 12.

"That stretch of putts on 10, 11, 12 was key. Things could have taken a turn for the worse and I was able to save some great three pars in a row," Rahm said.

"Hopefully, I can just swing it like I did on the last four holes, because I hit some beautiful shots, and keep it going on the weekend."

Rahm had struggled earlier with sending drives to his left.

"I feel like it looks worse than it really was," he said. "It's easy to get a little bit tight on this golf course and all of the shots, the start lines were proper, they just weren't fading.

"I'm just not turning fast enough. I just have to swing a little bit harder with the driver, and that's exactly what I did starting on 13."

Rahm seized a six-stroke lead after three rounds at the Memorial two weeks ago only to test positive for Covid-19, forcing him to withdraw from the tournament. He was forced to quarantine for a week but has shown no ill effects for the disruption in US Open preparation.

"What happened a couple weeks ago is something I can't control, but what I can do is control what I do every time, just every second of the day," he said. Make sure I'm hydrated, make sure I'm eating and make sure I'm thinking the right things out there on the golf course.

"So far I've done a great job, and hopefully I can keep going."

Part of that means not losing his temper, even after a great tee shot at 13 turned into a bogey.

"I never lost it," Rahm said. "I got a little frustrated on a couple of holes. I was making decent swings and just not getting the results you'd expect.

Rahm won his first US PGA title at Torrey Pines in 2017 and says his experience and knowledge from playing the course for years has helped him.

"Having played this course in every possible wind always helps," he said. "And I think just the memory of some putts and some breaks can always help."

Batter Nattakan to be first Thai in Women's T20 Challenge

Azarenka stuns Serena to set up US Open final against Osaka

Pucovski ruled out, Harris called up to Aussie Test squad