All entertainment places in 41 provinces, including Bangkok, will be ordered to shut their doors for at least two weeks, as Covid-19 cases spawned by the Thong Lor cluster spread rapidly across the nation. 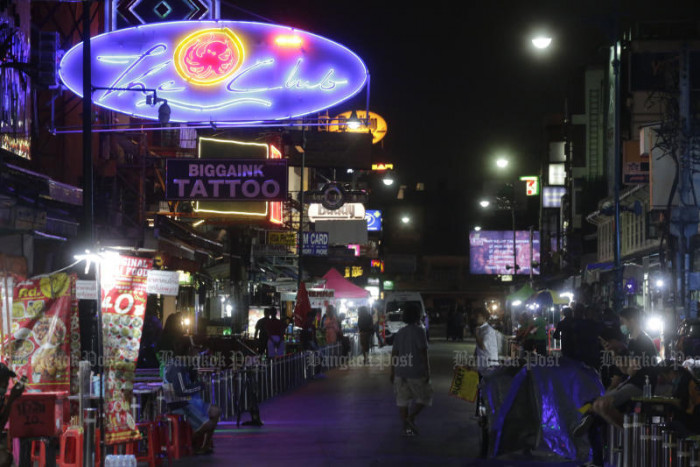 Thailand General Pubs, clubs in Bangkok, 40 other provinces to shut for 2 weeks Thong Lor cluster spread intensifies published : 8 Apr 2021 at 13:48 writer: Online Reporters All bars, pubs and clubs in Bangkok and 40 other provinces will be ordered closed for at least 14 days from Friday, to help stem the rapid spread of the latest coronavirus outbreak. (Photo: Pornprom Satrabhaya) All entertainment places in 41 provinces, including Bangkok, will be ordered to shut their doors for at least two weeks, as Covid-19 cases spawned by the Thong Lor cluster spread rapidly across the nation. Taweesilp Visanuyothin, spokesman for the Centre for Covid-19 Situation Administration, said on Thursday the closure would take effect when Prime Minister Prayut Chan-o-cha signs the order at a meeting on Friday. Health and security officials agreed in talks on Thursday that a blanket closure in all provinces was not necessary. They opted for what Dr Taweesilp called "target therapy" in  provinces with the potential to spread Covid-19. Their prime concern was the spread of the UK variant of the virus, with cases detected in Thailand for the first time. "It would be unfair to prescribe a strong dose to all provinces," the CCSA spokesman said. The target provinces were those plagued by new infections and those at risk because they were a gateway, or main passage, for travellers, he said. The decision comes ahead of the long Songkran holiday next week, when millions of people will hit the roads for vacations or family reunions. New cases linked to pubs, bars and clubs in Thong Lor area have leapt from Wednesday's report of 291 in 15 provinces to 504 cases in 20 provinces on Thursday, according to CCSA figures, which track infections since March 22. The 41 provinces where all entertainment venues - bars, pubs, clubs and karaoke bars - will be closed are: Bangkok Ayutthaya Buri Ram Chachoengsao Chaiyaphum Chanthaburi Chiang Mai Chiang Rai Chon Buri Chumphon Kanchanaburi Khon Kaen Lamphang Loei Lop Buri Nakhon Nayok Nonthaburi Nakhon Pathom Nakhon Ratchasima Nakhon Si Thammarat Narathiwat Pathum Thani Phetchabun Phetchaburi Phuket Prachin Buri Prachuap Khiri Khan Ratchaburi Ranong Rayong Sa Kaeo Samut Prakan Samut Sakhon Samut Songkram Saraburi Songkhla Suphan Buri Surat Thani Tak Udon Thani Yala All 20 provinces hit by the Thong Lor cluster are included in the 41-province list. The CCSA spokesman said there would be no U-turn on the closure decision. The centre decided to make it public ahead of the signing of the order on Friday so that businesses could prepare in advance. The meeting on Friday would also announce a work from home policy for state agencies and encourage private firms to allow their employees to also work from home. There had been 405 new infections registered, 391 of them local transmissions, bringing the total number of confirmed cases to 30,310, the CCSA said on Thursday. No new deaths were reported. Bangkok led the list with 48 cases reported by hospitals and 47 from mass testing. Fourteen cases were imported - from the United Arab Emirates, India, Bangladesh, Malaysia, Switzerland, the United Kingdom and Turkey. The latest outbreak has already prompted two provinces, Buri Ram and Bung Kan, to issue orders that people coming from Bangkok, Pathum Thani, Nonthaburi, Samut Prakan and Nakhon Pathom must observe self-quarantine after arrival in the province. Buri Ram is on the list of 41 provinces; Bung Kan, which borders the Mekong River, is not. Do you like the content of this article? (9)
Read More

China weighs carrots and sticks in push to vaccinate millions

Thai minister's criminal past in Australia set for fresh...