A group of Thai citizens claiming to protect the monarchy plans to rally in front of Government House on Nov 25 to demand that Amnesty International cease its operations in Thailand. 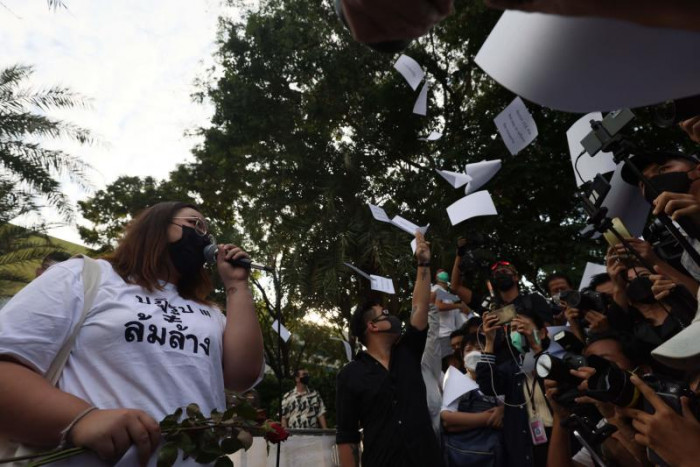 FILE PHOTO: Political activist Panusaya "Rung" Sithijirawattanakul (left) speaks outside the Constitutional Court in Bangkok as supporters throw paper signs on Nov 10, 2021, after the court ruled that three protesters' demands on monarchy reform amounted to calls to overthrow the constitutional monarchy. The ruling was cited in a letter from a pro-monarchy group calling for a ban on Amnesty International Thailand. (AFP)

A group of Thai citizens claiming to protect the monarchy plans to rally in front of Government House on Nov 25 to demand that Amnesty International cease its operations in Thailand.

The group, led by Noppadol Prompasit, on Tuesday revealed to the public a letter to Prime Minister Prayut Chan-o-cha calling for the government to conduct an investigation into Amnesty International Thailand to determine whether its activities could be regarded as a threat to national security and the royal institution.

The court ruled that 10 demands made in the speeches, including reform of the monarchy, could be construed as an exercise of rights and liberties with an aim to overthrow a democratic administration with the King as head of state in violation of Section 49 of the constitution. The court ordered the three to cease such action.

After the ruling, Mr Noppadol's group said in the letter, Amnesty National Thailand announced a campaign to send a million letters to people and organisations all over the world, calling for them to demand the government cease legal action against Ms Panusya.

This could be taken as an interference in the internal affairs of the kingdom, and Amnesty International Thailand's action was tantamount to urging people to commit aggression towards the royal institution, the letter said.

For these reasons, the government should immediately take action to remove this organisation from Thailand, the group wrote.

The letter said at 10am on Nov 25, members of the group would rally in front of Government House and deliver speeches denouncing Amnesty International Thailand.

With Pattaya schools closed, HHNFT steps in to teach

SRT promises to go after encroachers