MOSUL (IRAQ) - Pope Francis prayed Sunday for "victims of war" in northern Iraq, where the Islamic State group ravaged one of the world's oldest Christian communities until the jihadists' defeat three years ago. 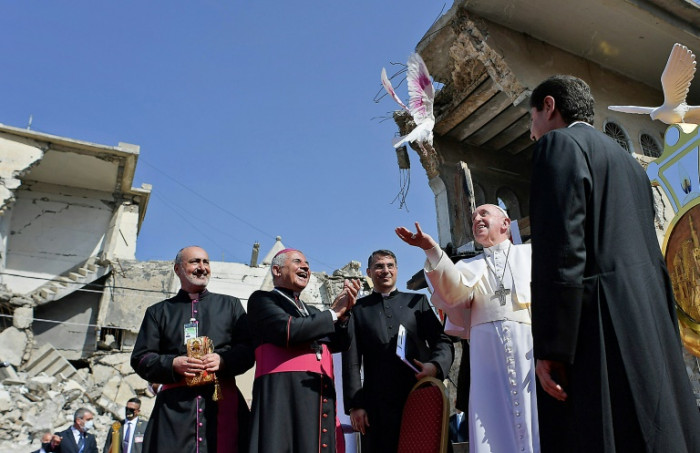 World Pope Francis prays for 'victims of war' in north Iraq published : 7 Mar 2021 at 17:45 writer: AFP Pope Francis releases a white dove near the ruins of the Syriac Catholic Church of the Immaculate Conception, in the Iraqi city of Mosul on Sunday. MOSUL, Iraq: Pope Francis prayed Sunday for "victims of war" in northern Iraq, where the Islamic State group ravaged one of the world's oldest Christian communities until the jihadists' defeat three years ago. With the partially collapsed walls of the centuries-old Al-Tahera (Immaculate Conception) Church behind him, Pope Francis pleaded for Christians in Iraq and the Middle East to stay in their homelands. The 84-year-old pontiff said the "tragic" exodus of Christians from Iraq and the wider region "does incalculable harm not just to the individuals and communities concerned, but also to the society they leave behind". The IS onslaught forced hundreds of thousands of Christians in northern Iraq's Nineveh province to flee. The country's Christian population has shrunk to fewer than 400,000 from around 1.5 million before the US-led invasion of 2003. The faithful had gathered on Sunday in the courtyard of the Al-Tahera Church, whose roof collapsed during fighting against IS in 2017. It is one of the oldest of at least 14 churches in Nineveh province that were destroyed by the jihadists. The heaviest deployment of security personnel yet has been mobilised to protect Francis in northern Iraq on what is perhaps the riskiest day of his historic trip to a country where state forces are still hunting IS sleeper cells. But the Pope appeared not to be fazed, as he was driven around Mosul's historic Old City -- largely razed during the grinding fight to dislodge the jihadists -- in a golf cart. - 'Do not lose hope!' - The visit to the north embodies a cause close to the Pope's heart: Iraq's traumatised Christian community. Watching from afar as IS swept across Nineveh in 2014, Pope Francis said at the time he was ready to come and meet the displaced and other victims of war in a show of solidarity. He finally fulfilled his promise on Sunday, holding a prayer service in Qaraqosh, whose ancient church -- named Al-Tahera, like the one in Mosul -- was torched by the jihadists, who largely also destroyed the town itself. Residents of Qaraqosh have since rebuilt their homes with little government help and Al-Tahera too has been refurbished, its imposing marble floors and internal colonnades buffed to host its most important guest yet. Dressed in traditional embroidered robes, hundreds of the faithful -- who speak a modern dialect of Aramaic, the language spoken by Jesus Christ -- welcomed the pontiff with hymns and olive branches. "Do not stop dreaming! Do not give up! Do not lose hope!" Francis urged those gathered. "Now is the time to rebuild and to start afresh," he said. Pope Francis's trip to Iraq as a "pilgrim of peace" aims to reassure the country's dwindling Christian community, but also to expand his dialogue with other religions. On Saturday, the leader of the world's 1.3 billion Catholics met Iraq's top Shiite Muslim cleric, the reclusive Grand Ayatollah Ali Sistani, who agreed that Iraq's Christians should be able to live in "peace". "We believers cannot be silent when terrorism abuses religion," Francis said at an interfaith service in the ancient site of Ur later that morning. - Holy mass in stadium - Francis landed early on Sunday at the airport in the Kurdish regional capital of Arbil, which was targeted just a few weeks ago by a volley of rockets that killed two people, the latest in a series of strikes blamed on pro-Iranian forces. He held a brief meeting with regional president Nechirvan Barzani and his cousin, the prime minister Masrour Barzani. Many thousands of troops and police have been deployed as the pope has criss-crossed Iraq, taking planes, helicopters and armoured convoys to cover more than 1,400 kilometres (870 miles) in-country. The other major challenge is the Covid-19 pandemic, with Iraq gripped by a second wave bringing around 5,000 new cases per day. Authorities have imposed a nationwide lockdown -- ostensibly to keep cases down but also to help control movements of crowds during the high-profile visit. While Francis has been vaccinated, Iraq has only just begun a modest inoculation campaign and there are fears that the crowds gathering to see him could amount to super-spreader events. The biggest event yet will be on Sunday afternoon, when several thousand people will gather at Arbil's Franso Hariri stadium for the Pope's last mass in Iraq. Arbil has been a relative haven of stability and a place of refuge for many Christians who fled IS. Do you like the content of this article?
Read More

Infantino says player calls for Floyd justice should be...