MINNEAPOLIS - The police officer accused of murdering George Floyd used inappropriate "deadly force" when kneeling on his neck for more than nine minutes, an expert told a court in Minneapolis on Wednesday. 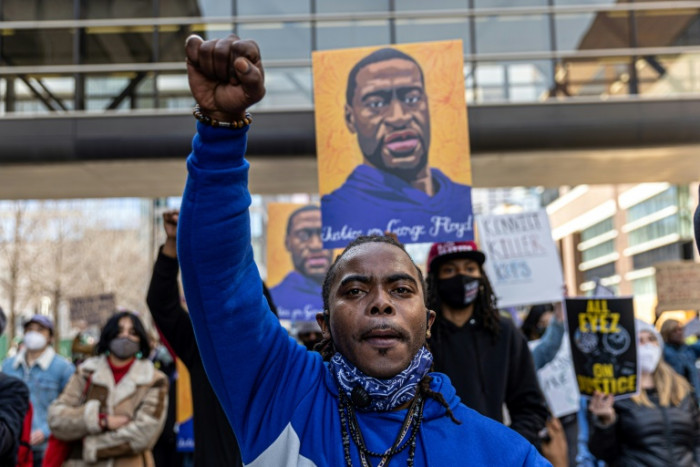 World Police used inappropriate 'deadly force' on Floyd: expert published : 8 Apr 2021 at 02:45 writer: AFP Demonstrators hold signs honouring George Floyd outside Hennepin County Court in Minneapolis, Minnesota MINNEAPOLIS - The police officer accused of murdering George Floyd used inappropriate "deadly force" when kneeling on his neck for more than nine minutes, an expert told a court in Minneapolis on Wednesday. Jody Stiger, a use-of-force specialist testifying for the prosecution, was questioned at the trial of Derek Chauvin, the white officer seen in phone footage kneeling on Floyd, who was Black. The harrowing images of Floyd's arrest in May 2020 touched off protests against racial injustice and police brutality in the United States and around the world. Stiger, a Los Angeles police officer, said that Chauvin's actions were "deadly force" because Floyd "was in the prone position." "And the pressure... being caused by (Chauvin's) body weight could cause positional asphyxia, which could cause death," Stiger said, after being shown pictures of the scene. Asked how much force was reasonable when Floyd was lying on his front, handcuffed and not resisting, Stiger said "no force should have been used once he was in that position." "An officer is only allowed to use a level of force that is proportional to the seriousness of the crime, or the level of resistance," he said. Defense attorney Eric Nelson asked Stiger if use-of-force sometimes "looks bad, but it's still lawful." Stiger agreed, saying "yes, based on that department's policies or based on that state's law." Prosecutors are seeking to prove that Floyd's death was due to asphyxiation, while Chauvin's defense claims it was due to illegal drugs in Floyd's system. - 'Bad, but still lawful' - Stiger said video footage suggested that the small crowd gathered at the site was not a hostile threat or a distraction for the officers -- challenging one apparent defense strategy to explain Chauvin's actions. He also testified that Chauvin squeezed Floyd's fingers and pulled his wrists using a technique to force people to comply to orders, but that Chauvin continued when Floyd offered no resistance. And Stiger said police were trained to avoid the neck when handling people, and to always put them on their side or seated when handcuffed. Another officer taking the stand Wednesday, James Reyerson, a lead investigator into the death, estimated that Chauvin weighed about 140 lbs (63 kilograms) and carried 30-40 lbs of equipment when he knelt on Floyd. Minneapolis police chief Medaria Arradondo testified on Monday that Chauvin violated the department's training and its "values." Chauvin, 45, who was sacked from the police force after the incident, has pleaded not guilty to charges of murder and manslaughter. Floyd was arrested on suspicion of passing a counterfeit $20 bill in a nearby store. A paramedic testified last week that Floyd, 46, was already dead when an ambulance arrived and that Chauvin was still kneeling on his neck. Chauvin, who has been in court every day taking meticulous notes and consulting with his attorney, faces up to 40 years in prison if convicted of the most serious charge -- second-degree murder. Floyd's family gathered in Minneapolis for the trial have said they are braced for further grueling evidence including images from the autopsy. "We talk about different things that we might see in court," his brother Philonise Floyd told the local StarTribune. "We know that autopsies are getting ready to show, so we're prepping each other." Their lawyer Ben Crump said that he was not aware of any plea negotiations between the prosecution and Chauvin. "The family wants him to be held accountable in the court of law to the full extent," Crump said. Police officers are rarely convicted in the United States when charges are brought and a conviction on any of the counts against Chauvin will require the jury to return a unanimous verdict. Three other former police officers involved in the arrest are to be tried separately later this year. Do you like the content of this article?
Read More

Kosovo president charged with war crimes in The Hague