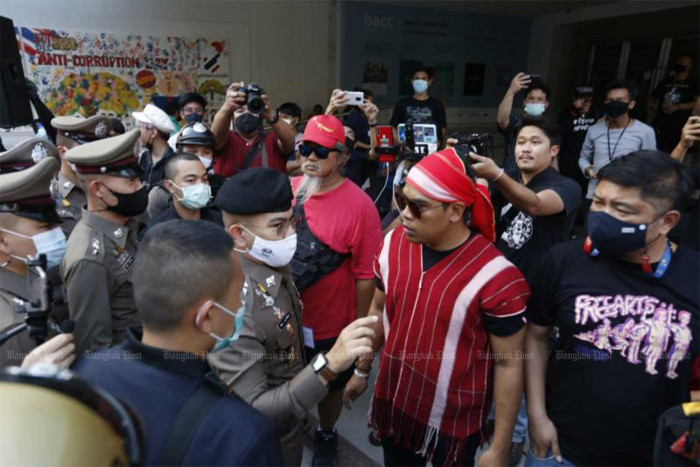 Thailand General PM: Government won't use force in Bang Kloi published : 23 Feb 2021 at 19:28 writer: Mongkol Bangprapa Activists hold an activity in Bangkok's Pathumwan area on Monday to save Bang Kloi indigenous Karen community in Phetchaburi province. (Photo: Wichan Charoenpakul) Prime Minister Prayut Chan-o-cha on Tuesday said his administration won't use force against ethnic Karen villagers living in Phetchaburi's Kaeng Krachan National Park as past governments did. Instead, this government will take care of those living in Bang Kloi by ensuring they have proper jobs and a place to live, he said. The promise was made after local groups in Phetchaburi threatened to hold a rally outside Government House if the government fails to take decisive action against Karen villagers whom they said were destroying the forest. "We are not going to let anyone destroy Kaeng Krachan's forests anymore. If the PM refuses to take action against the villagers, Phetchaburi residents will have no choice but to demand negotiations with the prime minister," said Sumol Sutaviriyawat, president of an environmental conservation club in Phetchaburi. She was among several local activists who petitioned Gen Prayut on Tuesday to reject the agreement reached between the Ministry of Natural Resources and the Environment and Bang Kloi villagers. Despite the agreement, violations of the National Parks Act (2019), including deforestation and land encroachment in Kaeng Krachan National Park, have continued, she said. "A recent ruling by the Administrative Court also clearly states that no one is allowed to return to the forest where they used to live," she said, referring to the return of about 70 villagers to their homes in the national park, from where they were forcefully evicted out of by park authorities in 2011. Deputy Prime Minister Prawit Wongsuwon echoed Gen Prayut’s stance, saying authorities won’t use force against Bang Kloy villagers and will try to resolve the conflict through dialogue. Yutthaphon Ankinandana, an adviser to Natural Resources and Environment Minister Varawut Silpa-archa, meanwhile, revealed that the operation called "Phet Watershed Forest Protection", which kicked off on Monday, went smoothly. Thirteen villagers voluntarily left the forest after peaceful negotiations, while the rest chose to remain there, said Mr Yutthaphon. The operation, in which two helicopters were used to survey the area, was jointly carried out by Kaeng Krachan National Park, Border Patrol Police and military officials, he said. Keywords Bang Kloi ethnic Karen villagers Do you like the content of this article? (1)
Read More