WASHINGTON - The Pentagon downplayed Monday the impact of attacks by Taliban insurgents in Afghanistan over the weekend as US and allied forces began their withdrawal from the country. 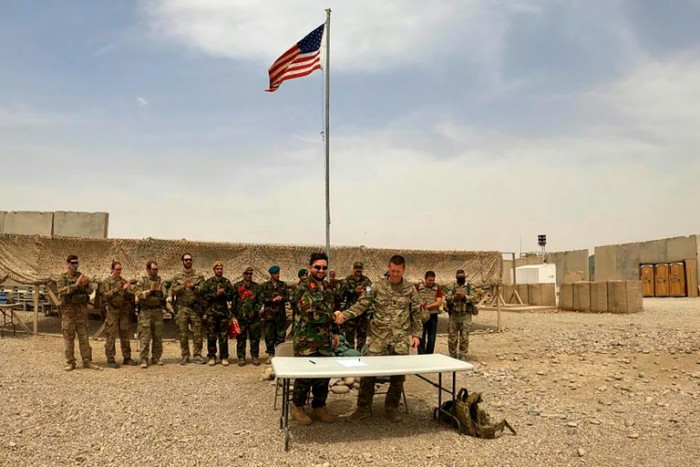 World Pentagon downplays newest Afghanistan clashes published : 4 May 2021 at 07:45 writer: AFP A US and Afghan soldier shake hands during the handover ceremony at Camp Antonik in Helmand province WASHINGTON - The Pentagon downplayed Monday the impact of attacks by Taliban insurgents in Afghanistan over the weekend as US and allied forces began their withdrawal from the country. "What we've seen are some small harassing attacks over the course of the weekend that have not had any significant impact, certainly not on our people or on our resources there," said US Department of Defense spokesman John Kirby. "We've seen nothing thus far that has affected the drawdown, or had any significant impact on the mission at hand in Afghanistan." On Saturday, just as the US military formally began to pull out its last 2,500 troops in the country, it launched a "precision strike" against the source of fire that targeted an airfield in Kandahar used by the Americans. General Austin Miller, the US commander in Afghanistan, "certainly has at his disposal response options to make sure that he's protecting our troops and our people," Kirby said. Nearly 20 years after US and allied NATO troops invaded the country and ousted the Taliban government as they pursued Al-Qaeda after the September 11, 2001 attacks, President Joe Biden ordered in April the final withdrawal. But the Taliban meanwhile has stepped up its attacks against the US-backed government in Kabul, adding to worries that American troops were also at higher risk as they pull out. Fighting between Afghan government forces and the Taliban on Saturday and Sunday in several provinces, including Kandahar, left more than 100 insurgents dead, according to the Afghan defense ministry. Kirby also said that the Pentagon was "well aware" of the risks that many Afghans who worked for the US military and coalition forces face as the Taliban grow in power and threaten to seize control in Kabul. US Defense Secretary Lloyd Austin is in talks with other officials "about how we meet our obligations to them," he said. Do you like the content of this article?
Read More