RANCHO MIRAGE, California: Thailand’s Patty Tavatanakit maintained her lead on Friday at the ANA Inspiration, the first major tournament of the LPGA season, with compatriot Moriya Jutanugarn just two strokes behind her. 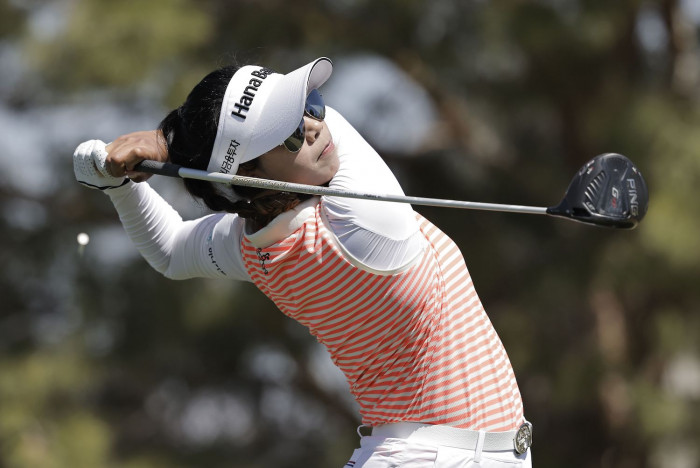 Sports Patty Tavatanakit maintains lead at LPGA event Moriya Jutanugarn just two strokes behind Thai compatriot at ANA Inspiration tourney published : 3 Apr 2021 at 11:58 Patty Tavatanakit of Thailand tees off on the 11th hole during round two of the ANA Inspiration at the Dinah Shore course at Mission Hills Country Club in Rancho Mirage, California on Saturday. (AFP Photo) RANCHO MIRAGE, California: Thailand’s Patty Tavatanakit maintained her lead on Friday at the ANA Inspiration, the first major tournament of the LPGA season, with compatriot Moriya Jutanugarn just two strokes behind her. Patty recorded an eagle while shooting a 3-under-par 69 in the second round on the Dinah Shore Tournament Course at Mission Hills Country Club, leaving her at 9-under 135. Chinese veteran Shanshan Feng, who also carded a 69, is one stroke behind, while Moriya is alone in third place at 7 under, also after a 69. England’s Charley Hull (69) and Sweden’s Anna Nordqvist (70) are tied for fourth at 6 under par. New Zealand’s Lydia Ko (69), Germany’s Sophia Popov (69), England’s Georgia Hall (70) and three South Korean players — Inbee Park (69), Mirim Lee (70) and Jin Young Ko (70) — share sixth place at 5 under. Patty, starting on the back nine, was 1 over par for the day before she eagled the par-4 15th hole, then added a birdie on the par-4 16th hole. The rest of the way, she had two birdies and one bogey. The key was the eagle, on which her 115-yard approach shot landed right in the hole. “It was really good shot, a little bit of a draw spin in,” she said. “I could feel it moving right to left and towards the hole. I looked good and then I heard [a sound] and it was a good feeling.” The UCLA graduate, who is ranked 101st in the world, was cautious when asked about the next two rounds and the possibility of earning her first LPGA Tour victory. “Just keep doing what I’m doing, focusing on what’s important, what I can control out there,” she said.. “There’s going to be a lot of challenges on the weekend, and I’m ready to face it. It’s not going to be easy. If I were going to win it it’s going to be tough.” Moriya had four birdies prior to making her lone bogey of the day on the 16th hole. “It was another pretty solid round for me,” she said. “You know, you just have to have a lot of patience out there. Seems like the wind was blowing starting this morning and it just makes it different. “I mean, I’m not a long hitter so I just have to take what I can and just try to play smart and put myself into places I can have a good chance.” Among other Thai competitors, third-year pro Pajaree Anannarukarn had another solid round, firing a 69 to move to 4 under par. Ariya Jutanugarn, a former world No.1 who began the day tied with her sister at 4 under, did not fare as well. She struggled to recover from a triple bogey on the fourth hole and ended with a 75, leaving her at 1 under for the tournament. Feng finished well. She was 1 under for the round prior to notching birdies on the 17th and 18th holes. “I missed a few fairways on the front, so, I mean, on this course if you’re in the rough, then it’s hard to get the ball onto the green in regulation,” Feng said. “I just missed a few up and downs, but I still think overall I was pretty good.” Keywords Golf LPGA Patty Tavatanakit Moriya Jutanugarn Do you like the content of this article?
Read More

Intarat out after just one day at IWF