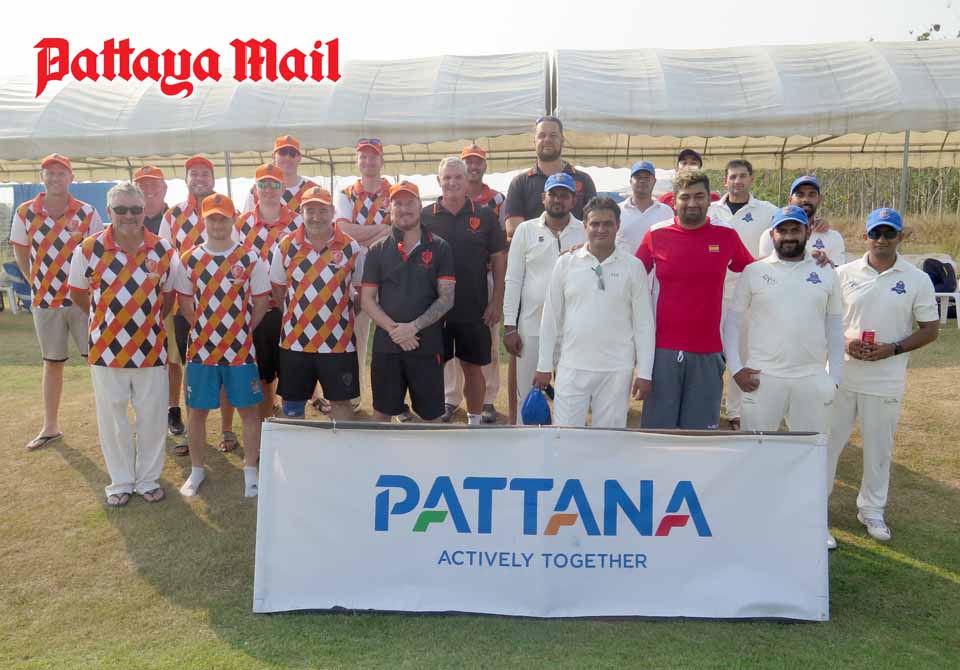 Pattaya and Bangkok Blues CCs. A last ball defeat sees Pattaya CC (PCC) upended by Bangkok Blues CC (BBCC) and elimination from the Royal Bangkok Sports Club (RBSC) Challenge Cup finals The elimination finals were played at Pattana Sports Resort (PSR) on Sunday 25 th April. PCC had to win this match to continue playing. An abandonment due to rain would see them lose as they finished below BBCC in the league table. PCC made a fantastic start with Wez Masterton scoring a century, but after the openers and Ryan Driver were removed, the middle order stuttered to a halt against the BBCC spinners and all momentum was lost. A final flurry of three run outs in 3 balls, aided by some dubious decisions from the Square Leg umpire, saw PCC finish on 179 for 8. A very good score but BBCC had batting in depth. PCC bowled well enough and they took wickets regularly, but their fielding was poor. Catches lose matches and there were plenty of dropped catches which cost PCC the match. Wez Masterton receiving his MotM medal from Vaughan McClear. Simon Philbrook lost the toss, again, and was asked to bat – not his preferred choice. The usual opener of Wez Masterton and Matt Harkness took the crease against seam bowlers Vivek Yadav and Subhan Khan. The weather was overcast, with rain, which could be seen in the distance, was forecast. It soon began to rain – boundaries from Wez as Matt scored singles to rotate the strike. Two balls were lost outside the ground! All of the BBCC bowlers got the same treatment with Ajay Tak conceding 30 off 2 overs 100 was reached in the 11 th over. The score reached 131 by which time Wez had swatted 6 fours and 10 sixes before he was bowled by Subhan Kahn for 103. Ryan Driver took the crease and pushed singles and twos and Matt finally got a boundary before he was caught for 25 by Subhan Khan off Mayar Parmar. Matt was not happy as he felt the ball was a bump ball and the fielder didn’t get his fingers under it. Ryan was dismissed soon after, bowled by Subhan Khan for 18. The score was 153 for 3 in the 19 th over and a 200 score was possible, but it was not to be. Mayar, Kamlesh Singh and Rahat Hussain were hard to get away and both Luke Stokes and Dan Allen went cheaply (1 and 4) to Mayar and Kamlesh. The quicks returned to the BBCC attack and the less than spritely PCC batsmen were run out in quick succession. Trevor Moolman (Gary Moolman’s father) was in by a yard but given run out and Bernie Lamprecht’s run out was a tough call. PCC had scored only 48 off the last 12 overs and lost 8 wickets. PCC finished on 179 for 8. Wez Masterton with his Man of the Match medal. BBCC sent in Rahat Hussain and Anirban Basu to face Ryan Driver and Matt Harkness. A boundary 4 off the first ball and then 5 swings and misses. The ball was swinging for both bowlers and they were keeping things tight. 27 for 0 after 5 overs. Ian Liddell entered the attack and Anirban was dropped by Ryan – it was a difficult catch over his shoulder but he got both hands to it. The first drop of many that day. Three balls later, Rahat was caught behind by Dan Allen for 15 and Irfan Menon arrived. He led a charmed live for his 33, being almost caught by Trevor Moolman (Gary’s dad) at square leg, and when on 10, Trevor dropped an absolute dolly of a catch – that proved expensive. Chris Lindop entered the attack and had Anirban brilliantly caught on the boundary by Wez for 13. Mayar Parmar in next. Irfan pushed on whilst Chris got wobblyitis of the bowling arm and Irfan escaped again as Simon Wetherell got finger tips to a possible catch off Wez. Ian Liddells 3 rd over had Parmar bowled for 5 and BBCC were 56 for 3 after 10 overs. Irfan was dropped again a few overs later by Ian Liddell at cow corner – PCC were having a terrible day in the field. Bernie Lamprecht’s second over has Irfan caught, finally, at mid-on by Andy Emery. 81 for 4 after 13 overs. PCC hiding from the rain. This was the point where PCC fell apart. Could BBCC chase down 179? Vidit Mishra replaced Mayar and Moonish Davangiya replaced Irfan. Both of them played well, hitting Chris for 16 in one over but generally scoring 10. Andy Emery had success in his one over by trapping Mishra LBW for 20 at 117 for 5, but Moonish battered Bernie. The quicks returned to stem the run rate and Matt struck quickly by having Moonish caught by Wez for 36 off 21 balls. 144 for 6 in the 20 th over. 35 need off 5 overs and a win was in their grasp. Vivek Yadav and Kamlesh Singh continued to score well and whilst Ryan and Matt kept it tight, they needed 10 off the last over. Ian Liddell got the cherry and bowled a wide! After some singles, 2 runs were needed off the last ball. Kamlesh hit a 4 and BBCC won by 4 wickets. A great fight-back and a match PCC should have won after such a good start.
Read More

Weather forecast for world cities -- May 5

Thais warned about vaccine tourism to US