Nicaragua votes, with Ortega re-election all but certain

MANAGUA - Under ring-of-steel security, Nicaragua on Sunday opened its polls for presidential elections dismissed as a "sham" by the international community, with all viable challengers to long-term leader Daniel Ortega locked up or in exile. 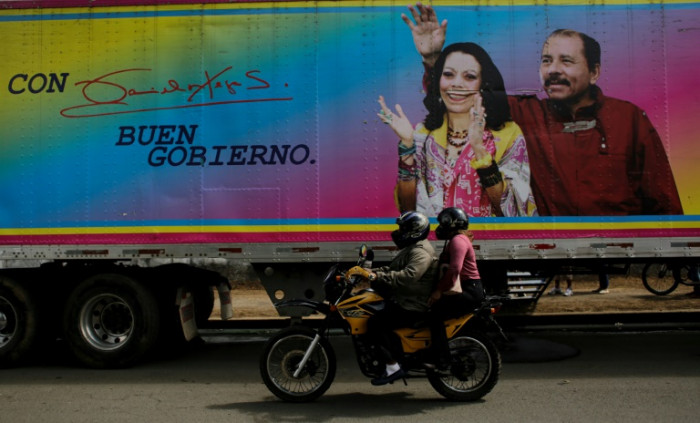 Nicaragua votes, with Ortega re-election all but certain

MANAGUA - Under ring-of-steel security, Nicaragua on Sunday opened its polls for presidential elections dismissed as a "sham" by the international community, with all viable challengers to long-term leader Daniel Ortega locked up or in exile.

About 4.3 million Nicaraguans are eligible to cast votes in one of 13,459 ballot boxes placed throughout the impoverished Central American country, with polling stations closely guarded by 30,000 police and military personnel.

As Ortega, 75, prepared to claim a fourth consecutive term -- his fifth overall -- the United States described Nicaragua as a "cautionary tale" with a regime "determined to hold on to power at any cost."

"It will be quite clear that these elections will have no credibility, that they're a sham," Patrick Ventrell, the US State Department's Central American Affairs director, said Thursday.

"We are going into a scenario where you have a dictatorship, and we'll have to respond to such."

Just over three years after massive protests against his rule and a violent crackdown that claimed more than 300 lives, Ortega is assured another five-year term with his wife and vice president, Rosario Murillo, 70, by his side.

Seven people who had any real shot at the presidency are among 39 opposition figures detained in a brutal government clampdown that started in June.

Ortega, the leader of the Sandinista National Liberation Front (FSLN), faces five opponents, though in name only -- all are derided as regime collaborators.

The vote takes place without international observers and with most foreign media denied access to the country.

Nicaragua's last opposition daily, La Prensa, had its director thrown in prison in August, and Facebook announced this week it had closed a government-operated troll farm spreading anti-opposition messages.

Amid the suppression, fear is vying with apathy among Nicaragua's voters. Voting is not mandatory in the country of 6.5 million.

"There is no one to vote for. Daniel (Ortega) has it in the bag," a 46-year-old woman told AFP at her home in Masaya, 35 kilometers (20 miles) south of the capital Managua.

She asked not to be named. "One cannot talk. You'll go to jail," she said.

A firebrand Marxist in his youth, Ortega ruled Nicaragua from 1979 to 1990, after the guerrilla ousting of US-backed dictator Anastasio Somoza Debayle.

Two-thirds of respondents in a recent Cid-Gallup poll said they would have voted for an opposition candidate on Sunday.

The favorite was Cristiana Chamorro, daughter of Violeta Barrios de Chamorro, who is the only person to have beaten Ortega in an election, in 1990.

But Chamorro is under house arrest, and six other presidential hopefuls are behind bars in conditions their family members say amount to torture.

The jailed opposition figures are accused of unspecified attacks on Nicaragua's "sovereignty" under a law passed by a parliament dominated by Ortega allies, who also control the judicial and electoral branches.

Three political parties and dozens of civic organizations are prohibited.

Apart from about 150 political opponents known to be behind bars, more than 100,000 Nicaraguans are in exile to avoid arrest -- mainly in Costa Rica, Miami and Madrid.

For Ortega -- whose main allies are Venezuela, Cuba and Russia -- his jailed critics are not political prisoners but "criminals" seeking to overthrow him with US backing.

The wave of arrests has worsened ties with Washington and the European Union, both of which have imposed sanctions against Ortega family members and allies.

EU foreign policy chief Josep Borrell has branded Ortega a "dictator" staging "fake" elections, and on Wednesday the US Congress approved a law to ramp up punitive measures.

Polling stations will close at 6:00 pm local time (0000 GMT), and the first official results should be known around midnight, according to election authorities.

US seizes Chinese products made from human hair in forced...

Three dead as protests erupt over killing of Ethiopian...