The government on Tuesday recorded 965 new cases of the novel coronavirus. 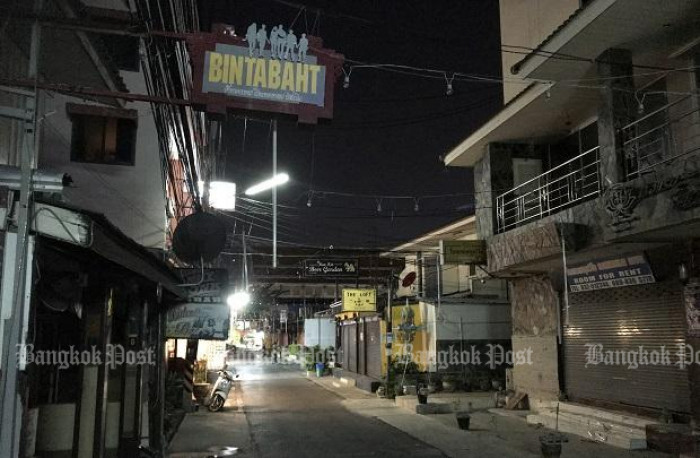 Learning Really easy news New Covid cases again top 900 published : 13 Apr 2021 at 13:47 writer: R May ORIGINAL SOURCE/WRITER: Online Reporters Hua Hin's red light district is deserted on Monday evening following the closure of bars and a spike in Covid-19 cases in Hua Hin and other districts of Prachuap Khiri Khan province. (Photo: Dave Kendall) The government on Tuesday recorded 965 new cases of the novel coronavirus. Tuesday's report brings the accumulated total since the start of the pandemic to 34,575. All but nine of the new cases were locally transmitted. No new deaths were reported, leaving the toll at 97. It was the third straight day with more than 900 new cases in Thailand, although Tuesday's number was marginally lower than the previous two days. Chiang Mai led new infections nationwide with 251 cases, followed by Bangkok (194), Chon Buri (97) and Prachuap Khiri Khan (73), according to Centre for Covid-19 Situation Administration (CCSA) figures. "Provinces under close watch are Chiang Mai and Bangkok," Department of Disease Control director-general Opas Karnkawinpong said. He added most new cases were linked to nightlife clusters around the country. The figures in Prachuap Khiri Khan will jump on Wednesday given the provincial public health office registered 141 additional cases, two of them foreigners, on Tuesday. The latest tally in Prachuap Khiri Khan will be included in the CCSA’s Wednesday report. Most of the new patients appeared to have contracted the virus in Maya Exclusive Club in Hua Hin district, the Prachuap office said. A female employee of Krystal Club in Bangkok’s Thong Lor area – infected but asymptomatic – attended a concert at the Hua Hin club on March 30 and appears to have set off an outbreak throughout the province. The five imported cases logged on Tuesday comprised five from Malaysia and one each from Switzerland, Pakistan, India and Germany, the CCSA said. Search Copy Search Copy Vocabulary accumulate : to get more and more of something over a period of time - เก็บสะสม, สะสม, สั่งสมมานาน asymptomatic (adj) : (of a person or illness) having no symptoms, i.e., not signs of a disease or medical condition - ไร้อาการ cluster : group of people, animals or things close together - กลุ่ม contract : to become infected with a disease - ติดเชื้อ given : because of a particular fact - เนื่องจาก log : to put information in an official record or write a record of events - ลงบันทึก marginally : by a small amount - เล็กและไม่สำคัญ, เล็กน้อย novel : a thing, person or situation that is of interest because it is new, unusual or has not been known before เรื่องหรือสิ่งใหม่,สินค้าใหม่ที่แปลกและมักอยู่ในตลาดได้ชั่วคราวเท่านั้น - set off : to cause a situation or a series of events to happen, especially without intending to - ก่อให้เกิด tally : a record or count of a number of items - การบันทึกจำนวน Do you like the content of this article?
Read More

THAI may delay flights until Aug 1