LONDON - Myanmar's ambassador to Britain accused a Rangoon military-linked figure of occupying the embassy Wednesday and barring him access, in an extraordinary diplomatic stand-off a month after the envoy called for the junta to release ousted civilian leader Aung San Suu Kyi. 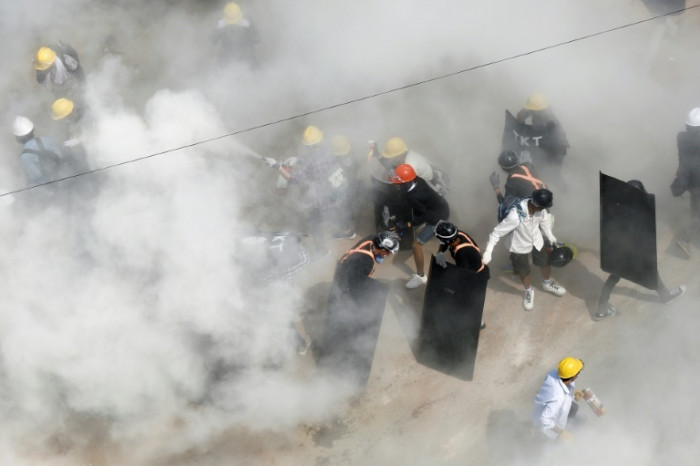 World Myanmar's UK envoy says military attache 'occupied' embassy published : 8 Apr 2021 at 05:45 writer: AFP A group representing Myanmar's ousted civilian government says it has gathered 180,000 pieces of evidence showing rights abuses by the military junta LONDON - Myanmar's ambassador to Britain accused a Rangoon military-linked figure of occupying the embassy Wednesday and barring him access, in an extraordinary diplomatic stand-off a month after the envoy called for the junta to release ousted civilian leader Aung San Suu Kyi. Protesters gathered outside the building in London's Mayfair neighbourhood with the ambassador, Kyaw Zwar Minn, as reports emerged he had been locked out. When asked who was inside, he replied: "defence attache, they occupy my embassy." The ambassador told AFP that he would stay outside the embassy "all night", explaining "this is my building". Myanmar has been in turmoil since the army deposed civilian leader Suu Kyi on February 1, with nearly 600 people killed in a crackdown on anti-coup protests that has ignited international outrage and pleas for restraint. The junta recalled the ambassador last month after he issued a statement urging them to release Suu Kyi and President Win Myint. "Diplomacy is the only response and answer to the current impasse," Kyaw Zwar Minn said in the statement that was tweeted by British Foreign Secretary Dominic Raab. Britain's Foreign Office, which has been a strong critic of the coup, said it was "seeking further information following an incident at Myanmar's embassy in London", and the Metropolitan Police said they were aware of the situation. Kyaw Zwar Minn told the Daily Telegraph that "when I left the embassy, they stormed inside the embassy and took it. "They said they received instruction from the capital, so they are not going to let me in," he added, calling on the British government to intervene. - Rights abuse dossier - Demonstrations calling for the return of democracy and the release of Suu Kyi have rocked Myanmar almost daily since the coup. Civil servants, doctors and other key workers have downed tools as part of a civil disobedience movement aimed at preventing the military from running the country. In response, the security forces have used rubber bullets and live rounds to break up rallies and detained thousands of activists. International powers have voiced anger and dismay at the junta's brutal approach, and imposed sanctions on key officials. But while the UN Security Council has condemned civilian deaths, it has stopped short of considering sanctions, with both China and Russia against the move. And so far, the diplomatic pressure appears to be having little effect on the bloodshed. A group representing the ousted civilian government said Wednesday it has gathered 180,000 pieces of evidence showing rights abuses by the junta including torture and extrajudicial killings. A lawyer for the Committee for Representing Pyidaungsu Hluttaw (CRPH) -- a group of MPs from Suu Kyi's National League for Democracy (NLD) party -- met UN investigators Wednesday to discuss alleged atrocities by the junta. "This evidence shows widescale abuses of human rights by the military," the group said in a statement. They include more than 540 extrajudicial executions, 10 deaths of prisoners in custody, torture, illegal detentions and disproportionate use of force against peaceful protests, the statement said. The Assistance Association for Political Prisoners (AAPP), a local monitoring group, says 581 civilians have been killed in the crackdown and more than 2,700 arrested. Nearly 50 of the dead were children. With many protesters now in hiding to escape arrest, the junta is increasingly taking their family members hostage, according to AAPP. - 'Destroy the country' - The head of the military authorities, General Min Aung Hlaing, insisted they had dealt with the protests "in a democratic way", in a speech reported Wednesday by state media. He accused the protest movement of wanting to "destroy the country" and said only 248 protesters had been killed, along with 16 police officers. At least three people were killed on Wednesday in the northern town of Kalay when security forces broke up a protest camp, an NLD lawmaker and an activist told AFP, accusing the military of using at least one rocket-propelled grenade on the protesters. Authorities have also issued arrest warrants for 120 celebrities, accusing them of spreading information that could cause mutiny in the armed forces. - Growing bloodshed - Robert Volterra, a lawyer for the CRPH -- which claims the right to speak for the country instead of the junta -- held talks with the UN's Independent Investigative Mechanism for Myanmar on Wednesday, and said further meetings were planned for coming days. Rights group Amnesty International last month reported that the junta was using battlefield weapons on unarmed protestors and carrying out premeditated killings orchestrated by their commanding officers. The growing bloodshed has prompted warnings that Myanmar could slide into broader civil war. As well as breaking up protests and making arrests, the security forces have also sought to shut off news of the crisis, throttling internet access and independent media. In response, some activists have started a daily two-page newsletter called "Voice of Spring", rounding up independent media reports and publishing on Twitter. The military insists that it is responding proportionately to what it says are violent, armed protesters. It has defended seizing power, pointing to allegations of voting fraud in the November election which Suu Kyi's party won comfortably. burs-st/caw Do you like the content of this article?
Read More

Despite risks, 9-year-old Thai fighter eager to return to ring

Four Confederate portraits are removed from US Capitol

WHO warns of pressure on Latin American health systems