Myanmar&#39;s Suu Kyi to go on trial next week

Ousted Myanmar leader Aung San Suu Kyi will go on trial next week, her lawyer said Monday, with the Nobel laureate facing an eclectic raft of charges, from possessing unlicensed walkie-talkies to flou 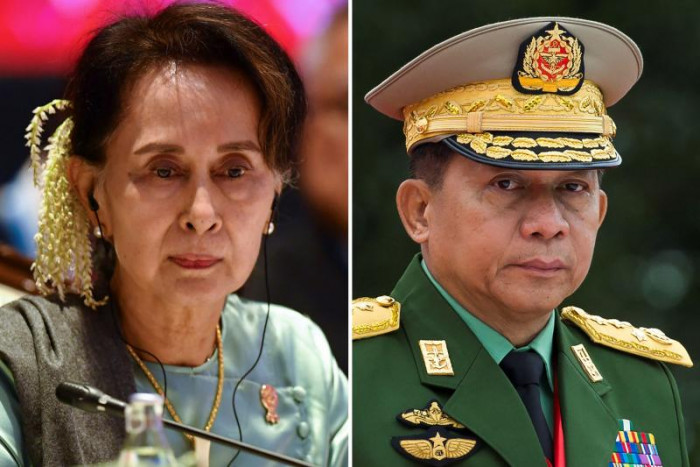 World Myanmar's Suu Kyi to go on trial next week published : 7 Jun 2021 at 18:01 writer: AFP In this combination of file photos created on Nov 14, 2019, Myanmar State Counsellor Aung San Suu Kyi attends the 35th Association of Southeast Asian Nations (Asean) Summit in Bangkok on Nov 4, 2019 (left) and Myanmar military chief Senior General Min Aung Hlaing attends the 71st anniversary of Martyrs' Day in Yangon on July 19, 2018. (AFP photos) Ousted Myanmar leader Aung San Suu Kyi will go on trial next week, her lawyer said Monday, with the Nobel laureate facing an eclectic raft of charges, from possessing unlicensed walkie-talkies to flouting coronavirus restrictions during elections last year. Myanmar has been in uproar since Suu Kyi and her National League for Democracy (NLD) government were ousted in a Feb 1 coup, with near-daily protests and a nationwide civil disobedience movement. Almost 850 people have been killed by the military, according to a local monitoring group. Suu Kyi, 75, will go on trial on Monday in Naypyidaw, where she is charged with violating restrictions during last year's election campaign and possessing unlicensed walkie-talkies. Proceedings will start on June 14 and are expected to wrap up by July 26, according to her legal team. Suu Kyi's lawyers have been allowed to meet with her just twice since she was placed under house arrest, with weeks of delays to her legal case. "We will get testimonies from plaintiffs and witnesses starting from next hearing," on Monday, lawyer Min Min Soe said after meeting her in the capital Naypyidaw. Suu Kyi will also appear in a separate trial slated to begin on June 15, where she is charged with sedition alongside ousted president Win Myint and senior NLD leader Dr Myo Aung, the lawyer said. There was a heavy police presence around the Naypyidaw council compound, close to where the court is located, with roadblocks along streets leading to the area, an AFP reporter said. Suu Kyi "asked all (people) to stay in good health," Min Min Soe added. The ousted leader faces a separate charge of violating a colonial-era secrecy law -- a case that is pending in a court in the commercial hub Yangon. - 'Show trial' - "Groundhog day again," Myanmar analyst David Mathieson told AFP, adding that proceedings in the junta-backed court would be little more than "a show trial". "It's all about an illegal regime discrediting a democratically elected leader on trumped up charges that would embarrass a tin pot dictatorship anywhere else." Suu Kyi spent more than 15 years under house arrest during the previous military rule before her 2010 release. Her international stature diminished following a wave of military violence targeting Buddhist-majority Myanmar's marginalised Muslim Rohingya community that displaced more than a million people, but the coup has returned Suu Kyi to the role of cloistered democracy icon. Junta leader Min Aung Hlaing has justified his power grab by citing alleged electoral fraud in the November poll, which Suu Kyi's NLD won in a landslide. The junta has previously said it would hold fresh elections within two years, but has also threatened to dissolve the NLD. The continuing violence in Myanmar has pushed some in the anti-junta movement to form a so-called "People's Defence Force" (PDF) in their townships -- made up of civilians who fight back against security forces with homemade weapons. But they are often outnumbered and outgunned in clashes with Myanmar's military -- one of Southeast Asia's most battle-hardened and brutal. Around 70 protesters marched in a flashmob demonstration in the commercial capital Yangon Monday, AFP images showed. Flashing the three-fingered salute -- a symbol of pro-democracy protests from Thailand to Hong Kong -- they chanted "We want Democracy" as they passed down a city street, before quickly dispersing. Do you like the content of this article? (22)
Read More

Thailand to launch fourth round of price reductions nationwide