A goalkeeper for the Myanmar soccer team who raised a three-finger salute in protest at the military coup in the country during a World Cup qualifying match in Japan said Thursday he has chosen not to return home and will apply for refugee status. 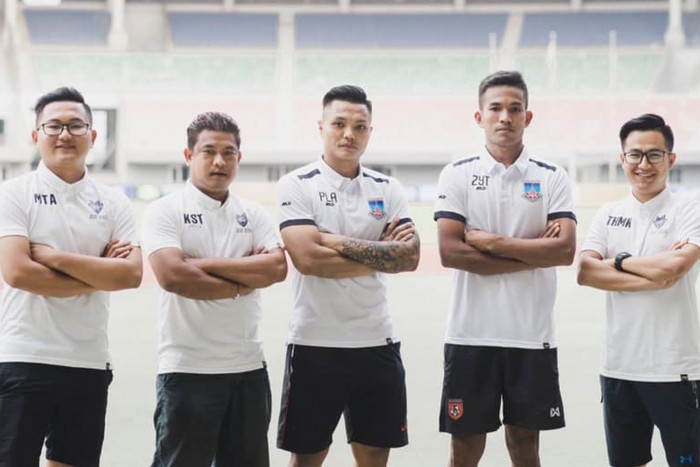 Pyae Lyan Aung (centre) poses with his teammate in an undated photo on his Facebook. (Photo take from Facebook Pyae Lyan Aung)

A goalkeeper for the Myanmar soccer team who raised a three-finger salute in protest at the military coup in the country during a World Cup qualifying match in Japan said Thursday he has chosen not to return home and will apply for refugee status.

Pyae Lyan Aung, 27, told reporters at Kansai airport in Osaka Prefecture that he has decided to stay in Japan as his "life would be at risk" if he returns home.

The player, who came on as a substitute in the May 28 game, was supposed to fly back home with his teammates on Wednesday night, but he told immigration authorities at the airport that he wanted to stay in Japan. He spoke to reporters in the early hours of Thursday.

Chief Cabinet Secretary Katsunobu Kato told a regular press conference that the government "would like to respond properly by listening to his wishes".

At the match between Japan and Myanmar in Chiba city near Tokyo, Pyae Lyan Aung raised three fingers of his right hand with "WE NEED JUSTICE" written on them in English while Myanmar's national anthem was played.

The salute has frequently been used as a show of resistance in the Southeast Asian country to the Feb 1 military coup, which ousted the democratically elected government. The footage went viral on social media.

Speaking to reporters through a Myanmar interpreter, Pyae Lyan Aung expressed concerns over the safety of other players and their families, saying the military has visited his home in Myanmar.

Calling for Japan's continued support for the people of Myanmar at the airport, the athlete again flashed a three-finger salute.

He said that he had almost given up on telling immigration authorities of his decision to stay in Japan, but drew on all his reserves of courage at the last moment while undergoing embarkation procedures.

The Justice Ministry said in May it will allow Myanmar residents who wish to remain in Japan to extend their stays as an emergency step. The measure also covers people from Myanmar seeking refugee status in Japan.

Pyae Lyan Aung said in the interviews he had planned the protest before his arrival for the match against Japan because he believed it would send out a strong message to the international community.

He also criticised the Myanmar military for firing on civilians during protests, comparing it to "slaughtering chickens".

"I would like the Japanese government and the international community to support us so we can restore justice and a fair society," Pyae Lyan Aung said.

The Japan-Myanmar soccer match, a preliminary qualifier for the 2022 Qatar World Cup, was initially scheduled for March but was postponed following the coup. It was Myanmar's first international game since the takeover.

The team played two further games in Japan before leaving, against the Kyrgyz Republic and Tajikistan, with the final six fixtures in Group F of the Asian qualifiers having been moved to Japan. Pyae Lyan Aung remained a member of the squad.

As of Wednesday, 865 people had been killed by Myanmar's security forces since the coup, with over 4,900 others in detention, according to the Assistance Association for Political Prisoners, a rights group that keeps track of deaths and arrests in the country.

Suu Kyi and other prominent politicians are among those in detention.

Debutant Jazz puts on a show at Masters