Hosts SCG Muang Thong United had the satisfaction of denying arch-rivals Buriram United a win but their come-from-behind 2-2 draw last night did little to boost their chances of securing a place among the top three in Thai League 1 this season. 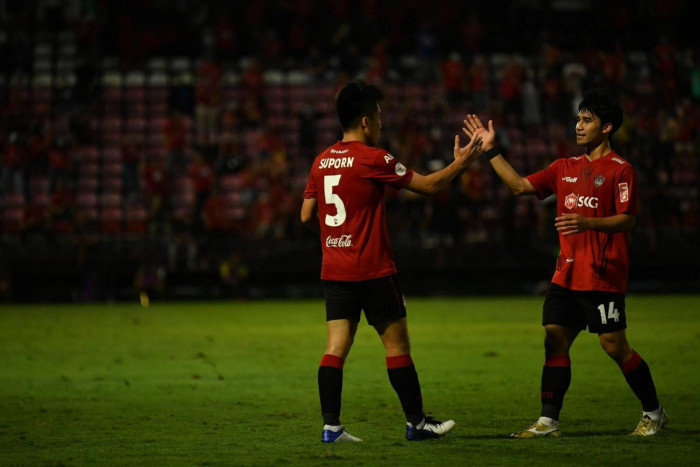 Sports Muang Thong rally twice to hold Buriram at home published : 7 Mar 2021 at 04:00 newspaper section: Sports writer: Tor Chittinand The Kirins' saviour: Muang Thong's Suporn Pinakatapho, left, celebrates his equaliser against Buriram United with teammate Chatmongkol Thongkiri. Hosts SCG Muang Thong United had the satisfaction of denying arch-rivals Buriram United a win but their come-from-behind 2-2 draw last night did little to boost their chances of securing a place among the top three in Thai League 1 this season. Muang Thong have now fallen seven points behind second-placed Buriram, who have 48 points from 25 matches so far and are one ahead of Port. Port would claim sole possession of second spot if they beat visiting True Bangkok United this evening. BG Pathum United secured their first T1 crown on Thursday night after beating Sukhothai 2-0 with a record six matches to spare. The Rabbits host dethroned champions Chiang Rai United this evening. The winners of the league and the FA Cup earn direct entries to the 2022 AFC Champions League group stages, whereas second- and third-placed sides in the top flight make it to the qualifying play-offs of the Asian club competition. At SCG Stadium, both sides started briskly with Muang Thong's Porramet Arjwilai firing a shot over the bar and Supachok Sarachat wasting an opportunity for Buriram in a similar fashion. The exchange of blows did not yield any goals and the first half ended in a goalless stalemate. The Thunder Castle got their first goal in the 47th minute from Maicon Margues after Muang Thong goalkeeper Somporn Yos was a fraction of a second late in his attempt to block the Brazilian's shot. The Kirins went all-out on attack and were rewarded in the 57th minute when they equalised through substitute Korrawit Tasa, who enjoyed a solo run to the box. Buriram went ahead in the 71st minute when Sasalak Haiprakhon crossed the ball for Piyaphon Panichakul to score from close range but only to see Suporn Pinakatapho pounce on a loose clearance from Pansa Hemviboon and level the score for the Kirins eight minutes later. In other games last night, hosts PT Prachuap picked up three points after a 1-0 victory over Nakhon Ratchasima, Police Tero claimed a 3-1 home win over Suphanburi, and Trat and Rayong played out a goalless draw in an eastern derby. Do you like the content of this article?
Read More

Buoyant Port to clash with Buriram in FA Cup last 16

Three things to watch in the Premier League

Australian Open 'likely' to be delayed by two weeks

South Africa to remain in Rugby Championship until 2030