Mixed doubles shuttlers Dechapol Puavaranukroh and Sapsiree Taerattanachai claimed their second Group B win to guarantee themselves a place in the quarter-finals while flyweight boxer Jutamas Jitpong advanced to the round of 16 at the Tokyo Olympics on Sunday. 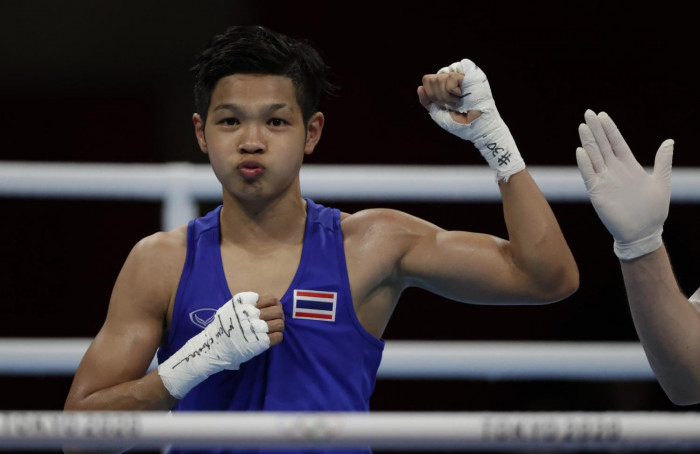 Mixed doubles shuttlers Dechapol Puavaranukroh and Sapsiree Taerattanachai claimed their second Group B win to guarantee themselves a place in the quarter-finals while flyweight boxer Jutamas Jitpong advanced to the round of 16 at the Tokyo Olympics on Sunday.

The third-seeded Dechapol and Sapsiree defeated France's Thom Gicquel and Delphine Delrue 21-9, 21-15 in just 34 minutes at the Musashino Forest Sports Plaza in Tokyo.

They will meet Britain's Marcus Ellis and Lauren Smith in their final group match today to decide the group winners.

The Thai fifth seed needed only 29 minutes to secure a 21-5, 21-10 victory. She will play Soniia Cheah of Malaysia on Wednesday.

The women's doubles team of Jongkolphan Kititharakul and Rawinda Prajongjai, however, suffered their second straight defeat after losing to Kim So-Yeong and Kong Hee-Yong of South Korea 19-21, 22-24 in Group D.

They will play European champions Gabriela Stoeva and Stefani Stoeva of Bulgaria in their final group game on Tuesday.

In boxing, Jutamas progressed with a 5-0 win over Roumaysa Boualam of Algeria in the women's flyweight (51kg) round of 32. She will next fight Irish Magno of the Philippines on Thursday.

In table tennis, both Orawan Paranang and Suthasini Sawettabut were through to the women's singles third round.

Skeet shooter Isarapa Imprasertsuk came fifth with 72 points on the first day of the women's qualification while world No.4 Sutiya Jiewchaloemmit, competing in her fourth Olympics, was 13th with 70 points. There are two more rounds of qualification and both shooters are still in with a chance to make it to the top six and qualify for the final.