LOS ANGELES - Five-time Olympic gold medallist Katie Ledecky closed out the Pro Swim Series in San Antonio with a dominant victory in the 800m freestyle on Saturday, her fourth win in as many days. 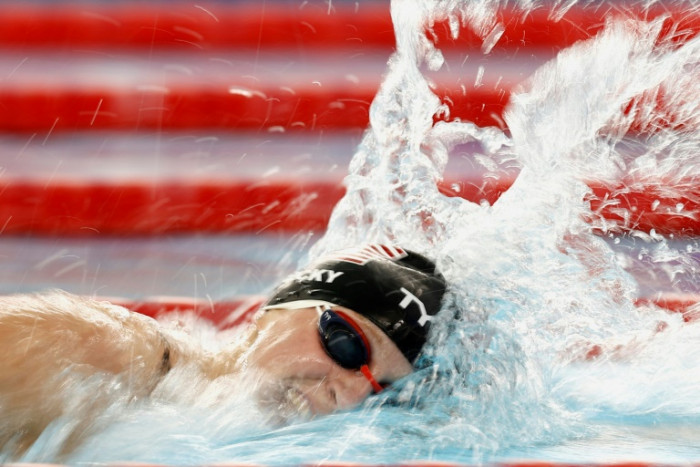 Sports Ledecky nabs fourth win at Texas Pro Swim published : 7 Mar 2021 at 11:45 writer: AFP Katie Ledecky closes out the TYR Pro Swim Series in San Antonio, Texas, with a victory in the women's 800m freestyle LOS ANGELES - Five-time Olympic gold medallist Katie Ledecky closed out the Pro Swim Series in San Antonio with a dominant victory in the 800m freestyle on Saturday, her fourth win in as many days. "I wanted to finish the meet on a good note, a positive note, and that's the best I felt all week," said Ledecky, who cruised to victory in 8min 13.64sec. "I'm happy to get back in training next week coming off that." Leah Smith was a distant second in 8:25.67 and Haley Anderson third in 8:29.15. The meeting in Texas was Ledecky's first full-scale long-course competition in a year, and a key step on her path to the US Olympic swimming trials in June and the rescheduled Tokyo Games. She opened with a victory in the 1,500m free on Wednesday, and also won the 400m and 200m freestyles, events she'll be aiming for in Tokyo in July. Simone Manuel, Ledecky's training partner in Stanford, California, won the 50m freestyle in 24.70sec, the best time in the world in 2021. The Rio 100m freestyle gold medallist added the 50m free title to the 100m free victory she claimed earlier in the week. "This meet's been a little rough for me, so it's nice just to get the win," said Manuel, who was also competing in her first proper long course meeting since the coronavirus pandemic brought global sport to a virtual standstill last March. Although she didn't hit her target times, Manuel said she felt there were positives to take away, including just getting back into the swing of competing amid ongoing precautions such as mask wearing and social distancing. "I'm glad to be back racing," said the Texas native, who was also looking forward to spending some time with her parents for the first time in more than a year, even though it meant she would have to isolate pending Covid-19 test results upon her return to California. - Backstroke thriller - Olivia Smoliga won the women's 100m backstroke in 59.49, out-touching world record-holder Regan Smith by one one-hundredth of a second. Former world record-holder Kathleen Baker was third, eight-hundredths of a second behind the winner. "This is the most stacked field you can race against, so you've really got to push it," Smoliga said. "It's really important in a season like this to push it, because that's probably what it's going to be at the end of the season." World record-holder Ryan Murphy won the men's 100m back in 53.56 with Coleman Stewart second in 54.48 and Poland's Kacper Stokowski third in 55.30. Michael Andrew cruised to victory in the men's 200m individual medley in 1:58.05. Runner-up Abrahm DeVine was the only other swimmer two break two minutes, clocking 1:59.65. Andrew Seliskar was third in 2:00.59 and 2017 world champion Chase Kalisz was fourth in 2:00.79. Ryan Lochte, who owns the world record of 1:54.00 set back in 2011, was fifth in 2:01.71. In other events on the final day of the meeting, Madisyn Cox won the women's 200m medley in 2:10.84 with Baker coming back after the backstroke to finish second in 2:11.96. Italy's Santo Condorelli won the men's 50m free in 22.49sec, and Egypt's Marwan el Kamash won the men's 800m free in 7:58.33. Do you like the content of this article?
Read More

Rahm aims at No. 1 after late birdies bring PGA Memorial...

FAT expects Nishino back by mid-August