TEHRAN - Iran's supreme leader Ayatollah Ali Khamenei said Monday the Islamic republic could boost uranium enrichment to 60 percent if needed, defiantly vowing to "not back down on the nuclear issue". 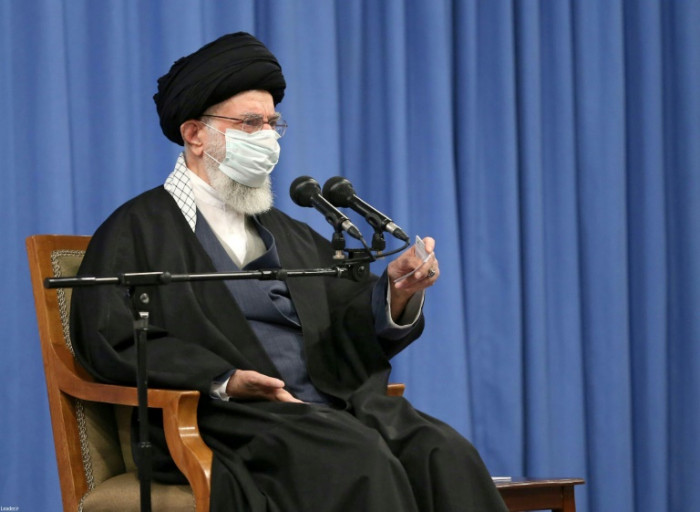 World Khamenei says Iran could boost uranium enrichment to 60% published : 23 Feb 2021 at 02:45 writer: AFP A handout picture provided by the office of Iran's Supreme Leader Ayatollah Ali Khamenei on February 21, 2021 shows him meeting with members of the Iranian Assembly of Experts in the capital Tehran TEHRAN - Iran's supreme leader Ayatollah Ali Khamenei said Monday the Islamic republic could boost uranium enrichment to 60 percent if needed, defiantly vowing to "not back down on the nuclear issue". That would be far above the 3.67 percent limit Iran had accepted under its 2015 landmark nuclear deal with world powers, but still short of the around 90 percent required to make an atomic bomb. The Islamic republic has repeatedly denied that it is seeking to build nuclear weapons, a point Khamenei reiterated in the comments that were posted on his official website Monday. His remarks came at a time Tehran, US President Joe Biden and European powers are trying to salvage the troubled nuclear accord that granted Iran international sanctions relief in return for restrictions on its nuclear programme. The deal has been on the brink of collapse since former US president Donald Trump unilaterally withdrew his country in 2018, reimposing crippling sanctions since as part of a "maximum pressure" campaign. Tehran responded a year later by gradually scaling back most of its key commitments. Early this year it boosted uranium enrichment back to 20 percent, the level it had reached before the nuclear deal. Khamenei said that "we will act to the point that is needed and the country requires" and that "we could bring enrichment to 60 percent" for nuclear propellants and other purposes. "The Islamic republic will not back down on the nuclear issue and will strongly continue down the path of what the country requires for today and tomorrow." Khamenei stressed that it was the United States that left the deal and emphasised that Iran's suspended commitments "are still reversible" if Washington returns to its commitments. - Last-ditch talks - The United States and Iran have been bitter enemies for four decades, and Washington accuses Iran of destabilising the region through support for Shiite Muslim militant groups, especially in Iraq, Lebanon and Yemen. Animosity deepened under Trump, whose maximum pressure campaign has denied Iran crucial oil revenues and cut it off from global banking, exacerbating its deep economic woes. Under Trump, the United States and Iran came to the brink of war several times, most recently early last year when a US drone strike in Baghdad killed top Iranian general Qasem Soleimani. Biden has signalled a readiness to revive the deal but insists Iran first return to all its nuclear commitments, while Tehran demands Washington take the first step by scrapping the sanctions. In the standoff, Iran's parliament late last year demanded that Tehran by Tuesday this week limit some inspections by the International Atomic Energy Agency (IAEA) if sanctions were not lifted by a deadline two days before then. IAEA chief Rafael Grossi on Sunday held last-ditch talks in Tehran, where the two sides hammered out a temporary technical deal for up to three months that is in line with the Iranian parliament's demands. They confirmed that Iran will continue to allow access to UN inspectors to its declared nuclear sites. But Iran will temporarily suspend so-called "voluntary transparency measures" -- notably inspections of non-nuclear sites, including military sites suspected of nuclear-related activity. Tehran will also deny the IAEA real-time access to footage from surveillance cameras installed at some sites and, if sanctions are not lifted within three months, delete it, Iran's Atomic Energy Organization has said. - Not 'flying blind' - Grossi said that under the new temporary understanding "there is less access" but that the IAEA will be able to "retain the necessary degree of monitoring and verification work". The last-minute deal had prevented the IAEA from "flying blind", he said, adding that now "political discussions at other levels can take place". Iran's foreign ministry said the outcome complied with parliament's demands and "resulted in a very significant diplomatic achievement and a very significant technical achievement". Russia also welcomed the agreement as "a tangible positive contribution" to help restart talks "about Washington's return to the 'nuclear deal'". Khamenei, in an apparent comment on Israel's Prime Minister Benjamin Netanyahu, whose country Iran blames for sabotage attacks on its nuclear programme, also said: "That clown of the Zionist regime keeps saying that we won't let Iran have nuclear weapons." The supreme leader added that "if the Islamic republic had meant to gain nuclear weapons, he (Netanyahu) and those mightier than him could not stop it". But he also insisted that "Islamic thought and principles" prevent Iran from seeking weapons of mass destruction. Do you like the content of this article?
Read More