A charter amendment bill scheduled for its third reading on Wednesday is at risk of being derailed as a result of a Constitutional Court ruling on Thursday. 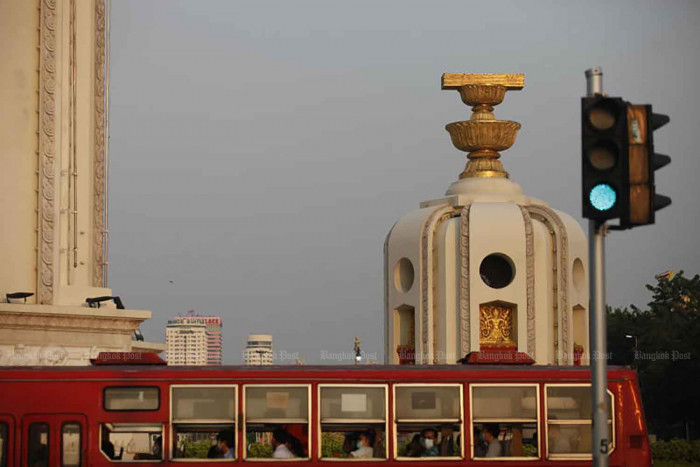 Thailand Politics Judges cast doubt on bill's passage published : 12 Mar 2021 at 05:00 newspaper section: News writer: Post Reporters The process of rewriting a new charter looks set to be put on hold. (Photo: Nutthawat Wicheanbut) A charter amendment bill scheduled for its third reading on Wednesday is at risk of being derailed as a result of a Constitutional Court ruling on Thursday. The majority of the court' judges ruled that parliament has the power to draw up a new constitution, though the people who hold the power to establish the constitution must first decide in a referendum whether they want a new one. If they decide they want a new charter and the draft of a new one is then completed, another referendum must be held for the people to endorse it, the court said. Worawit Kangsasitiam, president of the Constitutional Court, informed Parliament President Chuan Leekpai of the court's ruling in writing. Mr Chuan said on Thursday that there were different interpretations of the court's ruling so he would have to wait for further details from the court. Asked if the third reading could proceed as planned, Mr Chuan said it had already been placed on parliament's agenda before the court ruling. The court ruled on a petition submitted by Senator Somchai Swangkarn and Palang Pracharath Party MP Paiboon Nititawan. They had asked the court to clear doubts over parliament's ability to proceed in adopting the Section 256 amendment that would ultimately pave the way for the creation of a charter drafting assembly (CDA) to write a new constitution. Mr Paiboon said on Thursday that he believed the third reading on the charter amendment bill could not take place because the ongoing amendment process had already gone beyond the scope laid down by the court's ruling. He said the process has now been invalidated as a result of the ruling. "The public should have been asked in a referendum first whether they wanted the charter amended in its entirety," Mr Paiboon said. Senator Kamnoon Sidhisamarn said he was not sure now if the third reading could go ahead because the charter amendment bill deliberated in the first and second readings was not put to a referendum. However, deputy Pheu Thai leader Chusak Sirinil said the ruling indicated if the amendment bill passed its third reading, a referendum could then be held to ask the public whether they wanted a new constitution. If they back a new charter, a CDA would be set up to write it which would then be put to another referendum, he said. Do you like the content of this article?
Read More

Huge spinning waterspout looms over the ocean off Thailand...