Amazon.com Inc founder Jeff Bezos and three others landed after Blue Origin’s first flight to space with passengers aboard, a key milestone in the company’s effort to make space tourism viable. 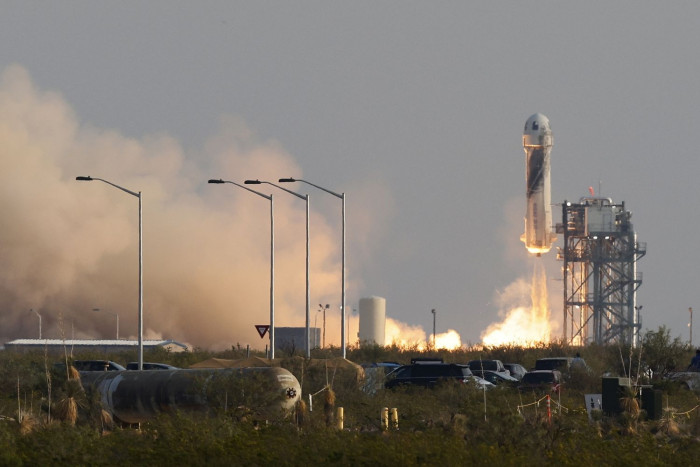 Amazon.com Inc founder Jeff Bezos and three others landed after Blue Origin’s first flight to space with passengers aboard, a key milestone in the company’s effort to make space tourism viable.

The company’s capsule landed in West Texas at about 8.22am local time, roughly 10 minutes after it launched on Blue Origin’s New Shepard rocket. The crew was to experience a few minutes of weightlessness as the ship soared past the Karman line at an altitude of about 100km above the Earth. The capsule then drifted back to the Earth beneath six parachutes.

The apparently successful mission caps a landmark month for space-tourism ventures, following by nine days a trip to the heavens by UK billionaire Richard Branson on a special plane made by Virgin Galactic Holdings Inc, a rival to Blue Origin.

Both companies are set to expand operations with plans to entice super-wealthy customers to pay big money for a unique travel experience.

A 3m-tall capsule with large windows and reclining leather seats detached from the booster and ascend beyond the Karman line, 100km above the Earth, where the passengers experience a few minutes of weightlessness and unforgettable views. They then strapped back in and fell toward the desert ground with six parachutes.

Blue Origin built suspense around the flight with a well-publicised auction. An anonymous bidder offered $28 million to fly alongside Bezos, but what Blue Origin described as a timing conflict left an opening for Oliver Daemen, the 18-year-old son of a Dutch financier.

Also on board: Bezos’s brother Mark, 53, and Wally Funk, 82, a former astronaut trainee. Funk was the oldest person to travel to space and Daemen the youngest.

Both companies want to sell space joy rides to wealthy tourists. Highly publicised excursions by their billionaire founders serve as a vote of confidence in the safety of such trips.

Bezos, 57, said he’s planned on traveling to space since he was five years old. He started Amazon.com Inc as an online book business from his Seattle garage in 1994 and turned it into the world’s largest online retailer, making him the wealthiest man on the planet with a net worth exceeding $200 billion, according to the Bloomberg Billionaires Index.

He’s been selling Amazon stock to fund Blue Origin, which is based in Kent, Washington, now has 3,500 employees and also builds rocket engines used to launch satellites. Bezos stepped down as Amazon CEO earlier this month to become executive chairman of the e-commerce giant.

Branson’s flight earlier this month stole some thunder from Bezos’ launch and prompted social-media jousting. Blue Origin dissed the Virgin Galactic flight in a July 9 tweet, calling it a “high altitude airplane” with puny windows. Blue Origin says it has the biggest windows in space. On Monday, Virgin Galactic on Twitter wished the Blue Origin team a “successful and safe flight”.

Despite the fight for space tourism buzz, the ultimate goal is to make such trips routine on rockets that are reused like aeroplanes. The New Shepard booster will return to a landing pad so it can be reused rather than breaking apart in the atmosphere. Reusable rockets are key to lowering the cost of space travel, which could make it more accessible. Blue Origin hasn’t disclosed the expected price of future space trips or the amount paid by the teenager.

China taking on more conflict around the world

Pilgrims trickle back to the Ganges as India lockdown eases