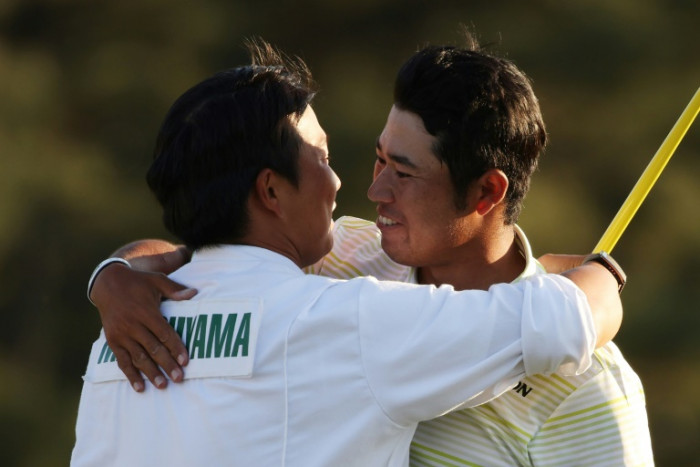 Sports Japanese bow, Scots Bob and Welshman on one leg: golf talking points published : 13 Apr 2021 at 14:45 writer: AFP Hideki Matsuyama (right) hugs his caddie, Shota Hayafuji after winning the Masters HONG KONG - The first men's major of 2021 dominates AFP Sport's golf talking points this week: - Take a bow - Hideki Matsuyama had tears in his eyes after his final putt Sunday as he became the first Japanese man to win a major, but his caddie also made headlines. While cameras were trained on Matsuyama, caddie Shota Hayafuji carefully replaced the pin, doffed his cap and bowed solemnly to the Augusta National course. Images of the gracious gesture have gone viral and Matsuyama admitted after that his immediate thoughts upon winning had been for his caddie. "When I saw my caddie, Shota, and hugged him, I was happy for him because this is his first victory on the bag," Matsuyama told reporters through a translator. "And then it started sinking in -— the joy of being a Masters champion." - Big moment for Mac - Left-handers have a great record in the Masters, despite only about five percent of the world's golfers being "lefties". This century Phil Mickelson (three wins), Bubba Watson (two) and Mike Weir (one) have triumphed at Augusta. Scotland's Robert MacIntyre was the latest lefty to make his Augusta debut last week and, like most observers, was staring intently at the leaderboard as Matsuyama attempted to close out. But "Bob", as he is known on tour, had his gaze fixed slightly lower down the board because he was in the clubhouse and locked in a six-way tie for 12th at two-under par, with only the top 12 and ties automatically gaining invitations for next year. Another left-hander, American Brian Harman, had a 20-foot birdie putt at the 18th that would have moved him to three-under and relegated the other five to tied 13th -- meaning no guaranteed return ticket. When Harman rolled it past the hole, Scotland's MacIntyre burst out of the clubhouse, jumped on his caddie and started fist-bumping all and sundry, in a celebration considerably wilder than Matsuyama's half-an-hour later. - Bryson's feeling Woosie - Big-hitting US Open champion Bryson DeChambeau found, for the second time in five months, that Augusta offers plenty of defence against his "bomb and gouge" approach after finishing tied 46th at five-over par following his tied 34th in November. In fact, the American, 27, was shown up by a couple of 63-year-olds in the opening round. DeChambeau's four-over 76 on Thursday was two strokes worse than German two-time Masters champion Bernhard Langer, whose first green jacket came in 1985, a year before Jack Nicklaus's last. But more embarrassingly, DeChambeau's 76 was matched by the 5ft 4in (1.64 metre) Ian Woosnam, who was playing his first round in 18 months to mark the 30th anniversary of his 1991 Masters triumph. "Woosie", who suffers from chronic arthritis, had back surgery 14 months ago. He then pulled his right groin early in the round and could hardly walk. "I was thinking of coming in after 11," confessed Woosnam. "I'm playing on one leg really. Plus I haven't had a scorecard in my hand for 18 months, so I was pretty damn pleased really." Unlike the 27-year-old DeChambeau, whose claim that strong men smashing the ball up to 400 yards will take over the game seemed way off course. - World rankings - Latest men's and women's leading world rankings: Men 1. Dustin Johnson (USA) 10.87 2. Justin Thomas (USA) 9.10 3. Jon Rahm (ESP) 8.82 4. Collin Morikawa (USA) 7.29 5. Xander Schauffele (USA) 7.18 (+1) 6. Bryson DeChambeau (USA) 7.12 (-1) 7. Patrick Reed (USA) 6.33 8. Tyrrell Hatton (ENG) 5.99 9. Webb Simpson (USA) 5.82 10. Patrick Cantlay (USA) 5.62 Selected: 14. Hideki Matsuyama (JPN) 5.36 (+11) 27. Will Zalatoris (USA) 3.58 (+19) 29. Jordan Spieth (USA) 3.50 (+9) Women: 1. Ko Jin-young (KOR) 9.65 2. Park In-bee (KOR) 8.57 3. Kim Sei-young (KOR) 8.05 4. Nelly Korda (USA) 7.86 5. Danielle Kang (USA) 6.47 6. Lexi Thompson (USA) 5.57 7. Brooke Henderson (CAN) 5.57 8. Kim Hyo-joo (KOR) 5.17 (+1) 9. Minjee Lee (AUS) 5.08 (+1) 10. Nasa Hataoka (JPN) 5.01 (-2) Selected: 11. Lydia Ko (NZL) 4.55 (+11) 13. Patty Tavatanakit (THA) 4.03 (+90) Do you like the content of this article?
Read More

Trends likely to continue in the second half of the NFL...

Sport and sexism in Japan