Thailand will roll out Covid-19 vaccination on Sunday as planned but the person who will get the first shot will not be the prime minister. 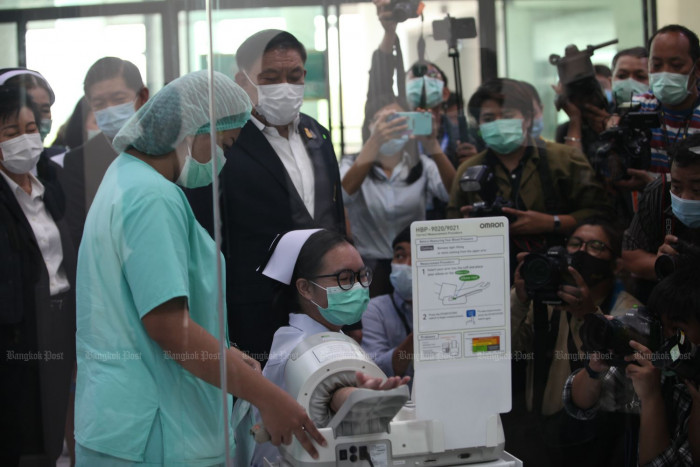 Thailand General Jabs rollout on course, Prayut won't be first Sinovac first, AstraZeneca can be used in second week of March published : 27 Feb 2021 at 18:04 writer: Online Reporters Bangkok Governor Assawin Kwanmuang observes a demonstration of Covid-19 vaccine injection at Bang Khun Thian Geriatric Hospital in Bangkok on Saturday. Vaccinations will begin in high-risk areas nationwide on Sunday. (Photo by Apichart Jinakul) Thailand will roll out Covid-19 vaccination on Sunday as planned but the person who will get the first shot will not be the prime minister. Public Health Minister Anutin Charnvirakul said on Saturday that Gen Prayut Chan-o-cha could not get the country’s first shot at the discretion of doctors. “Besides, the AstraZeneca vaccine [shipped to Thailand on Feb 24] has not been endorsed by the Medical Science Department. AstraZeneca has yet to submit documents and samples,” Mr Anutin said. Gen Prayut, however, will preside over an event to be held at the Bamrasnaradura Infectious Diseases Institute on Tivanon Road in Nonthaburi at 7.30am. The vaccine to be used on Sunday will be the Chinese-made CoronaVac developed by Sinovac Life Sciences, which can be used on people aged 18-59. Gen Prayut is 66. Kiattibhum Wongrajit, permanent secretary for public health, is reportedly scheduled to be the first person to be vaccinated, followed by frontline medical workers and others in high-risk groups. However, Mr Kiattibhum on Saturday declined to confirm the news, according to Thairath Online, pending a briefing later on Saturday. Mr Anutin said whether he would also get a shot on Sunday would depend on doctors’ discretion as well. “It doesn’t matter who get the shots first. Safety prevails and doctors will make the decisions,” said Mr Anutin, who will go to Samut Sakhon after the launch event to supervise the start of inoculations in the country’s hardest-hit province. Opas Karnkavinpong, director-general of the Disease Control Department, said CoronaVac was being sent to 18 target provinces in all. The first 13 provinces will get 200,000 doses at 32 hospitals. Meanwhile, AstraZeneca issued a statement on Saturday saying that even though the vaccine is now physically present in Thailand, it can only be used once the company completes all steps in the quality assurance process, expected to be completed in the second week of March. “AstraZeneca is working extremely hard for the Thai people, and actively collaborating with the Ministry of Public Health so that the vaccine can be delivered and be made available for use on the same day as completion of the Quality Assurance process,” read the statement. The country received its first batch of vaccine on Wednesday — 200,000 doses of CoronaVac. The vaccine procurement plan calls for another 800,000 doses to arrive in March and 1 million more in April. Sinovac Life Sciences is 15% owned by the Thai conglomerate Charoen Pokphand Group. While the government says it is looking at the possibility of making deals with more providers, for now it is counting on AstraZeneca to supply the rest of the country’s needs in 2021. The first AstraZeneca doses, made locally by Siam Bioscience under a technology-transfer agreement, are scheduled to be made available from June to August (26 million) and from September to December (35 million). However, 117,000 doses of AstraZeneca arrived on Wednesday. Authorities would not say where they came from, saying only they were part of the National Vaccine Institute’s procurement plan. Images of the crates showed labels indicating they came from South Korea, where SK Bioscience is the contract manufacturer for AstraZeneca. Thai officials did not confirm it. Do you like the content of this article? (2)
Read More

Bangladesh: 'No obligation' to help Rohingya at sea

Pandemic Suicides: How Thailand Is Trying To Stop Them