MILAN - Inter Milan coach Antonio Conte hailed a game "played to perfection" as Lautaro Martinez scored a double, with Romelu Lukaku also on target in a 3-0 win over city rivals AC Milan to extend their lead at the top of Serie A on Sunday. 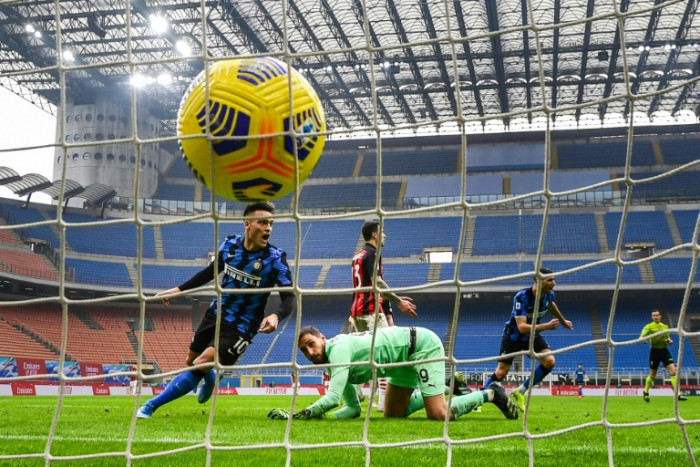 Sports Inter crush AC Milan to pull clear in Serie A as Roma, Napoli lose ground published : 22 Feb 2021 at 08:45 writer: AFP Inter Milan's Argentine forward Lautaro Martinez (L) celebrates after his second goal against AC Milan. MILAN - Inter Milan coach Antonio Conte hailed a game "played to perfection" as Lautaro Martinez scored a double, with Romelu Lukaku also on target in a 3-0 win over city rivals AC Milan to extend their lead at the top of Serie A on Sunday. Inter opened up a four-point lead over their second-placed opponents Milan as Conte's side target a first league title since their unprecedented treble under Jose Mourinho in 2010. "Credit to the lads, they put in an extraordinary performance, carried out to perfection," said Conte, bidding to end his former club Juventus's quest for a 10th consecutive league title. In third, Roma were held to a goalless draw at 15th-placed Benevento, giving Juventus, who are 11 points off top spot, the chance to move third against rock bottom Crotone on Monday. Roma are five points adrift of Milan with both teams going head-to-head in Rome next weekend. Behind, in a match for fourth place, Napoli crashed 4-2 at Atalanta with Nigerian forward Victor Osimhen stretched off and hospitalised overnight after losing consciousness following a knock to his head. In the San Siro, Lukaku was on top form, the Belgian playing a role in Martinez's two goals on five and 57 minutes before scoring his 17th goal in the league this season to move top of the Serie A scorers' chart. Milan, chasing a first Scudetto since 2011, fell to back-to-back Serie A losses for the first time this season. "We've suffered a lot this year," said Martinez. "Two eliminations in the Italian Cup and the Champions League, this is the only goal we have left and we're fighting for that." The match was played behind closed doors because of the coronavirus pandemic, but that did not stop thousands of fans gathering outside the stadium. It was the third derby of the season, with Milan winning the first 2-1 in the league, and Inter the Italian Cup quarter-final by the same scoreline, a game overshadowed by Zlatan Ibrahimovic and Lukaku squaring off and trading insults. Despite the restrictions supporters waited for the team buses to arrive, waving flags and singing, setting off smoke bombs, before the teams entered the stadium. "The welcome the fans gave us at the stadium gave us goosebumps," said Conte. The former Chelsea manager warned against complacency against their next opponents, 11th-placed Genoa and lowly Parma. "Psychologically, I dread these two games, that's where we'll have to show that we have passed a milestone. "These two games will say a lot about what we can do." - 'Tough week' - Inter were fresher with Milan coming off a 2-2 Europa League midweek draw at Red Star Belgrade. Lukaku powered down the right flank in the opening minutes. Milan defender Simon Kjaer blocked his initial cross, but the ball returned to the Belgian for a perfect delivery for Martinez to nod home. Ibrahimovic threated with a back-heel flick after quarter of an hour following a scramble in the box but Samir Handanovic kept it out, the Inter keeper also pulling off a double save from the Swede after the break. But Martinez broke through again, finishing off an Ivan Perisic pull-back from the by-line in a move started by Lukaku and Achraf Hakimi. Donnarumma denied Lukaku minutes later but the former Manchester United striker then burst through to score the third. "A striker depends on the team's performance," said Milan coach Stefano Pioli of Ibrahimovic who limped off with calf cramps with 15 minutes to go. "It was a tough week, the worst one of the season." In Bergamo, Atalanta moved fourth at the expense of Napoli in a game where all six goals came in the second half. Colombian pair Luis Muriel and Duvan Zapata both scored for the hosts with Robin Gosens scoring for his side and also an own-goal for Napoli, with Cristian Romero nodding in the fourth. The match finished in confusion after Osimhen hit his head on the ground after a Romero challenge in stoppage time. The 22-year-old was hospitalised overnight under observation for head trauma, the team said. Napoli are now seventh, three points behind Atalanta who occupy the final Champions League place. Roma meanwhile failed to take advantage against 10-man Benevento who played half an hour a man down after Kamil Glik's sending off. The capital side were also denied a late penalty which was awarded and then overruled after a VAR viewing. Do you like the content of this article?
Read More

Chris Froome to leave Team Ineos at end of season

Hamilton on top at Silverstone as 'victims' Mercedes make...