The hospitalisation rate for people injected with the Sinovac and AstraZeneca Covid-19 vaccines is 20-24 per 100,000 doses, according to the Department of Disease Control. 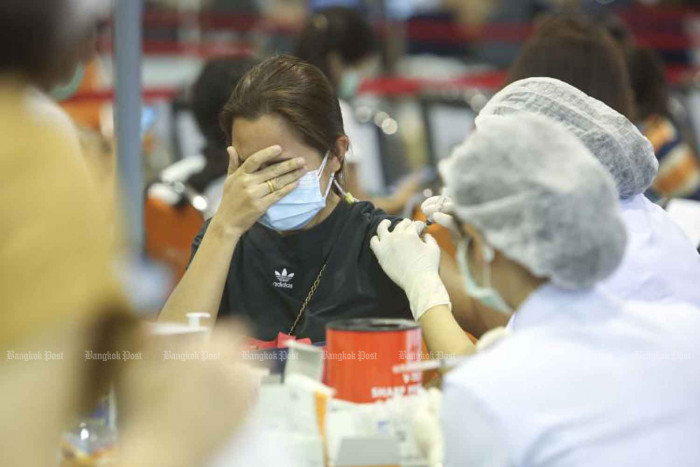 A woman covers her eyes and turns away as she receives a Covid-19 vaccine jab at the government complex in Bangkok on Thursday. (Photo: Pattarapong Chatpattarasill)

The hospitalisation rate for people injected with the Sinovac and AstraZeneca Covid-19 vaccines is 20-24 per 100,000 doses, according to the Department of Disease Control.

Of the Sinovac vaccine recipients, 993 had serious undesirable symptoms and were admitted to a hospital, a ratio of 20 per 100,000 administered doses (0.020%).


Of the AstraZeneca vaccine recipients, 472 had serious undesirable symptoms and were admitted to a hospital, a rate of 24 per 100,000 administered doses (0.024%).


"The symptoms are common to other vaccines administered ," he said.


Dr Chawetsan also said 68 people had died after receiving a Covid-19 vaccine. Experts had considered 13 of the cases to date, and concluded they had nothing to do with the inoculations .


They died of coincidental events.


Dr Chawetsan said the Covid-19 vaccines being administered in Thailand were safe.

Songkran allowed to go ahead