Gunn Charoenkul fired a brilliant 10-under-par 61 yesterday to take a one-shot lead into today's fourth and final round of the Boonchu Ruangkit Championship in Nakhon Ratchasima. 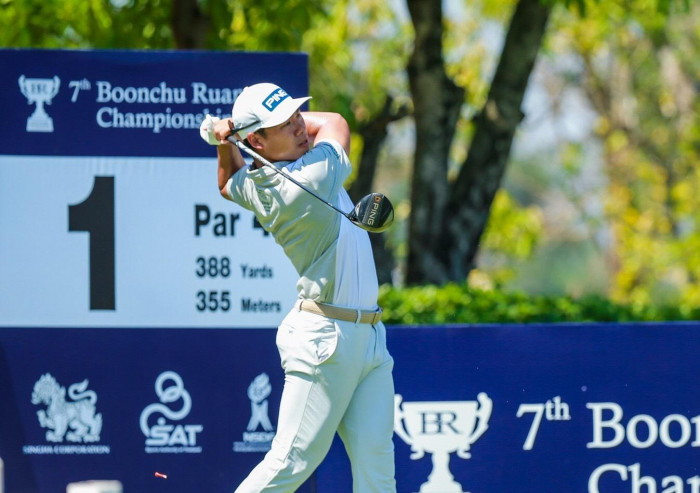 Sports Gunn holds slim edge at Boonchu meet published : 7 Mar 2021 at 04:00 newspaper section: Sports writer: Kittipong Thongsombat Splendid effort: Gunn Charoenkul plays a shot during the third round. Gunn Charoenkul fired a brilliant 10-under-par 61 yesterday to take a one-shot lead into today's fourth and final round of the Boonchu Ruangkit Championship in Nakhon Ratchasima. The 29-year-old sank 10 birdies for a total of 22-under 191 at the par-71 Rancho Charnvee Resort and Country Club in the season-opening All Thailand Golf Tour event. Gunn, a Japan Golf Tour regular, is the highest-ranked player in the field at No.172 in the world. Poom Pattaropong, who also shot a 61 with two eagles, seven birdies and a bogey, was second, one shot off the lead. Settee Prakongvech hit a 63 to share third place with overnight leader Sadom Kaewkanjana (67) on 193. "I struggled a bit at the start of the round. After that, I was able to hit the ball closer to the holes and made some good putts," said Gunn, who got only three birdies on the front nine before adding seven more on the back round. "On the back nine, I was more aggressive and my putter worked really well." Gunn is bidding for his fourth win on the All Thailand Golf Tour and first since his success at the E-san Open in 2014. Defending champion Pavit Tangkamolprasert, who won on 23 under last year, shot a 65 and was seven shots behind the leader on 15 under. He stayed joint 10th with five other players including Poosit Supupramai, who made two eagles en route for a 63. Thongchai Jaidee (68) was tied for 35th on 10 under while Prayad Marksaeng (70) was three strokes back. The seventh edition of the Boonchu Ruangkit Championship has a total purse of four million baht with the winner receiving 600,000 baht and projected seven world ranking points. Do you like the content of this article?
Read More

Arrests made as anti-government protests resume amid tight police security

Baseball aiming to have fans at World Series

Hamilton on top at Silverstone as 'victims' Mercedes make...