The Department of Disease Control insists it has enough supplies to give 10 million doses a month of AstraZeneca and Sinovac to those living in Bangkok and surrounding provinces. 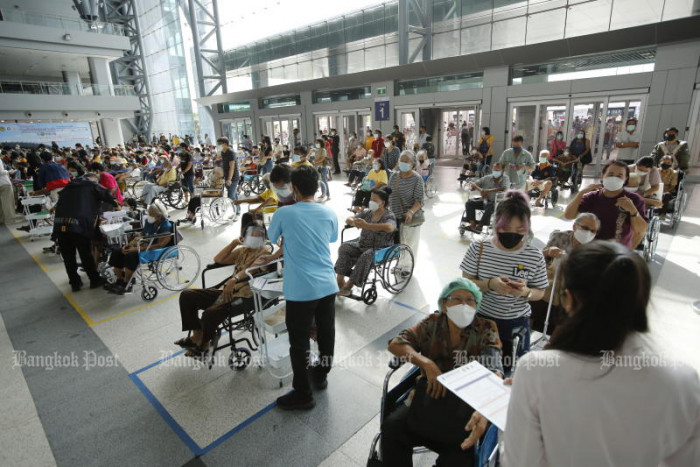 Senior citizens wait for their turn to be vaccinated at Bang Sue Grand Station on Sunday. (Photo: Wichan Charoenkiatpakul)

The Department of Disease Control insists it has enough supplies to give 10 million doses a month of AstraZeneca and Sinovac to those living in Bangkok and surrounding provinces.

Opas Karnkawinpong, director-general of the Department of Disease Control, said the government will increase the pace at which it is vaccinating people living in high-infection areas after having almost completed its target of immunising healthcare officers.

Next to receive their shots will be those suffering from chronic health complaints.


Next on the list will be Bangkok, its neighbours and other areas with high infection rates.

Dr Opas said the government was looking at other vaccine brands and had recently placed an order with Pfizer.

As to the question of whether more Sinovac vaccine will be ordered, he said the cabinet agreed there was evidence that Sinovac can help reduce critical symptoms.


Sinovac has come under fire recently after evidence emerged of people having received both doses but still falling ill with the virus.


Dr Opas also said that the use of a mix of vaccines may help to boost immunity against newer strains of the virus.


He said immunity could be achieved two weeks after taking mixed doses for a month and added the government hopes cross-vaccination will help it maximise its current resources and administer five million doses of Sinovac and six million doses of AstraZeneca a month.

First ‘Samui Plus’ arrivals enjoying their visit to famous island

Local airlines in no rush to serve Phuket