PARIS - Germany are under intense pressure as they face holders Portugal in a crucial Euro 2020 game on Saturday after world champions France were forced to settle for a draw with Hungary in the heat of Budapest. 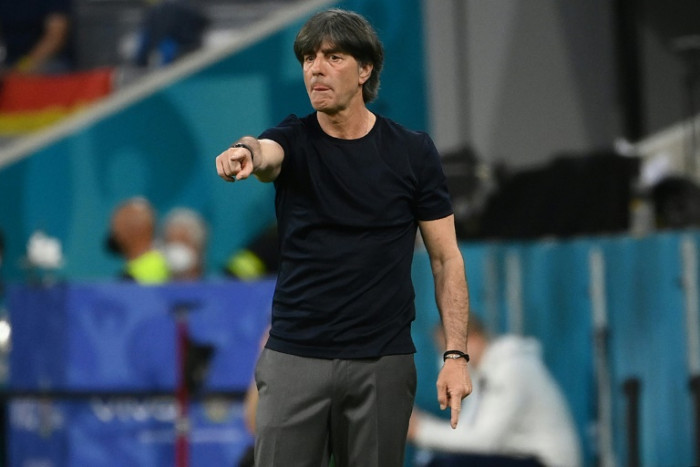 Germany coach Joachim Loew will leave his job after Euro 2020

PARIS - Germany are under intense pressure as they face holders Portugal in a crucial Euro 2020 game on Saturday after world champions France were forced to settle for a draw with Hungary in the heat of Budapest.

Spain also take on Robert Lewandowski and Poland in Seville later but first Germany know a defeat against Portugal would leave them on the brink of early elimination.

After their failure to make it beyond the group phase at the 2018 World Cup, Joachim Loew's side lost 1-0 to France in their opening game of the European Championship.

The Germans have home advantage in Munich, but on the evidence of recent performances they will struggle to win the latest heavyweight showdown in Group F.

Despite that Loew -- who will stand down at the end of the tournament -- believes his team can rise to the occasion.

"The pressure is always the same, it doesn't matter who we are playing against, and we can cope with it," Loew told reporters on the eve of the game.

Cristiano Ronaldo's Portugal opened with a convincing 3-0 win over Hungary and another victory will secure their place in the last 16 before their final group outing against France.

Ronaldo will again be in the spotlight after becoming the leading scorer in European Championship history with a brace against Hungary that left him on 11 goals across five tournaments.

With 106 goals in 176 games for Portugal, Ronaldo is just three short of the all-time international record, set by Ali Daei who scored 109 goals for Iran.

"Cristiano Ronaldo can't win matches on his own so everyone must play their part," Portugal coach Fernando Santos warned.

France, the pre-tournament favourites, were thwarted by Hungary in the intense heat and before a hostile crowd of almost 56,000 in Budapest, having to come from behind to draw 1-1.

In the only Euro 2020 venue without restrictions on capacity due to Covid-19, Attila Fiola gave the hosts a shock lead in first-half stoppage time after catching out the France defence.

But Antoine Griezmann, the Golden Boot winner at Euro 2016, equalised on 66 minutes as an unconvincing France avoided a first competitive defeat since June 2019.

The result meant the World Cup holders missed a chance to clinch a place in the last 16.

"A point is not what we were hoping for from this match but we will take it in the circumstances," admitted France coach Didier Deschamps.

France now stay in Budapest to face Portugal on Wednesday when they will hope to secure their spot in the next round.

Qualification remains a long shot for Hungary but their goal-scorer Fiola said it had been "one of the best days of my life, even the best".

Later all eyes will be on Spain's strikers as Luis Enrique's misfiring team take on Poland in Group E at 1900 GMT.

The 2008 and 2012 European champions were held 0-0 by Sweden in their opening game, while Poland lost 2-1 to Slovakia in their first match.

Spain striker Alvaro Morata was jeered by his own fans against Sweden but is set to keep his place.

"At international level, there is only one that beats him, which is Harry Kane," Luis Enrique insisted.

Meanwhile England manager Gareth Southgate said he had no complaints about the furious reaction from fans who booed them after they were held to a 0-0 draw by arch rivals Scotland on Friday.

Southgate's side were jeered at the final whistle at Wembley after managing just one shot on target, although they remain on course to qualify from Group D.

"This is a tournament and it's critical when you can't win not to lose," Southgate said.

"That of course feels difficult in the last 15 minutes of a game where fans are desperate for you to go forward and abandon all shape because of course it's Scotland, it feels like a unique occasion."

Wales face Italy in Rome on Sunday when a draw will ensure their progress to the last 16 from Group A.

They will be through even in defeat provided Switzerland fail to beat Turkey in Baku.

Thailand lose to Brazil but win praise from rivals

Chasing the virus: How India's largest slum beat back a...