The Court of Appeal has again rejected a request to temporarily release four pro-democracy protest leaders facing royal insult charges, saying there was no reason to change the previous ruling. 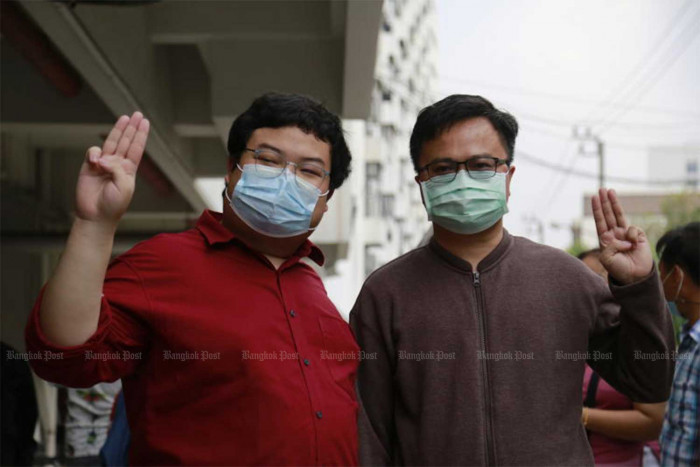 Thailand General Four protest leaders denied bail again Third setback in efforts to secure release of foursome awaiting lese majeste trials published : 27 Feb 2021 at 14:56 writer: Online Reporters Co-leaders of the Ratsadon Group, Parit “Penguin” Chiwarak and Arnon Nampa, flash a three-finger salute during a visit to the Office of the Attorney-General in Bangkok on Feb 9. (File photo by Arnun Chonmahatrakool) The Court of Appeal has again rejected a request to temporarily release four pro-democracy protest leaders facing royal insult charges, saying there was no reason to change the previous ruling. It was the third rejection of attempts to free the foursome, who face the prospect of months behind bars before their trials start. Noraset Nanongtoom, a lawyer from Thai Lawyers for Human Rights, on Saturday posted a copy of the ruling on his Facebook page and wrote: “The Court of Appeal denied bail for the Ratsadon Group leaders — Mr Parit Chiwarak and the other co-leaders — by citing that ‘There is no reason to change the previous ruling’.” The court document was signed but the full name and position of the judge was not noted underneath as is normal practice, so it is not known who made the decision. The lawyer said the application submitted to the court on Friday outlined four points that he believed supported the release of the four men. The first was a cash bond of 400,000 baht for each defendant, which was higher than the previous bail request. Charnvit Kasetsiri, a former rector of Thammasat University, and Panas Tassaneeyanon, a former dean of the university’s Faculty of Law, had agreed to act as guarantors for the defendants, said the lawyer. The three other issues were that the defendants posed no flight risk, they had not yet found been guilty by a court and thus they were considered innocent, and all had permanent residences, said Mr Noraset. The rejection was the latest in a series of setbacks in the case involving Mr Parit, Arnon Nampa, Patipan Luecha and Somyot Phrueksakasemsuk. They have been in the Bangkok Remand Prison since Feb 9 when they were formally indicted on charges including lese majeste in connection with rallies at Sanam Luang on Sept 19 and 20 last year. The Criminal Court rejected their initial bail request. The Court of Appeal on Feb 15 upheld the Criminal Court decision, citing the defendants’ disrespect for the monarchy and saying they posed a flight risk. Subsequent requests to the Criminal Court on Feb 17 and Feb 22 were also rejected , with both decisions upheld by the Court of Appeal. Supporters of the activists have complained of double standards, pointing to the swift decision this week to grant bail to leaders of the 2014 street protests that paved the way for the military coup that overthrew the elected government of Yingluck Shinawatra. On Friday, the Court of Appeal granted bail to eight former leaders of the disbanded People’s Democratic Reform Committee (PDRC) jailed two days earlier by the Criminal Court after their convictions on insurrection and other charges. Their lawyer Sawat Charoenphon said the court granted them bail because they had not attempted to flee while out on bail during their trial in the Criminal Court. The eight are Suthep Thaugsuban, Issara Somchai, Chumpol Julsai, Suwit Thongprasert and Samdin Lertbutr, and three former cabinet ministers: Buddhipongse Punnakanta, Thaworn Senneam and Nataphol Teepsuwan. The trip automatically lost their positions in the Prayut Chan-o-cha government when they were convicted. They were among 26 people handed varying jail sentences on Wednesday for their roles in the 2014 street protests led by Suthep, a former deputy prime minister and Democrat Party heavyweight. Do you like the content of this article? (5)
Read More

Huge spinning waterspout looms over the ocean off Thailand...

Former communist base in Phatthalung to become tourist...

Coronavirus death toll rises to 427 with over 20,000 infected