Four Karen villagers were arrested by national park officials for allegedly poaching in Kaeng Krachan National Park, just a week after the government launched a dialogue to resolve the ongoing land dispute with the indigenous forest dwellers. 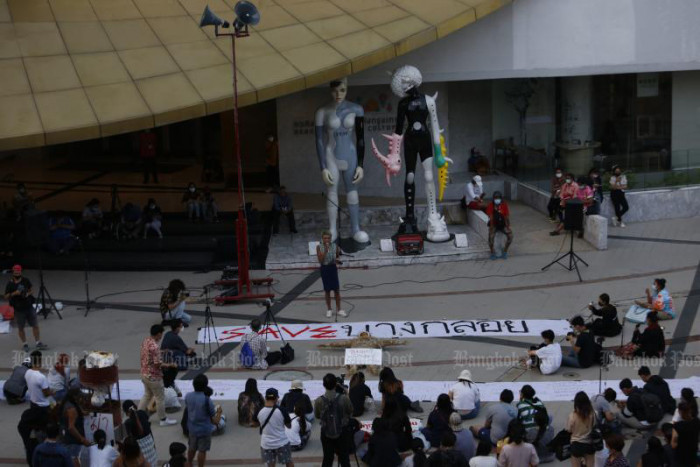 Thailand General Four Karen villagers arrested for 'poaching' Bang Kloi dispute with park officials deepens published : 22 Feb 2021 at 20:05 writer: Apinya Wipatayotin Activists hold an event outside Bangkok Art and Culture Centre on Monday against a government attempt to evict indigenous forest dwellers from Kaeng Krachan National Park. (Photo by Wichan Charoenpakul) Four Karen villagers were arrested by national park officials for allegedly poaching in Kaeng Krachan National Park, just a week after the government launched a dialogue to resolve the ongoing land dispute with the indigenous forest dwellers. Adviser to the Minister of Natural Resources and Environment Yutthaphon Angkinan said the group was arrested for bringing gunpowder and lead balls to a protected reserve, in a crackdown on forest offences in Kaeng Krachan in Phetchaburi's Kaeng Krachan district. The two-day crackdown that began on Monday was initiated by the Department of National Parks, Wildlife and Plant Conservation (DNP) and was intended to reveal the extent of damage from poaching and land clearing in the national park, the DNP said earlier. The crackdown came despite an ongoing dialogue between the government, conservationists and ethnic Karen villagers behind the #SaveBangKloi campaign on Jan 14. In the campaign, 40 Karen villagers returned to their homes in Jai Paen Din in Bang Kloi, where they had lived before they were evicted by park authorities when their homes were declared a national park in 1981 — making it off-limits to the general public. On Monday, park officials took police and Phetchaburi officials on a helicopter ride to survey the forests around Jai Paen Din. Mr Yutthaphon said some 34 rai of forests in the area were damaged on Jan 23 alone, before adding that in total, over 120 rai of forest in the area has been cleared by burning. He added despite the evidence of poaching, Natural Resources and Environment Minister Varawut Silpa-archa has asked park officials to avoid using force against "forest encroachers" and Karen villagers living in and around Bang Kloi. The forest in question is located some 13 kilometres away from where the returning villagers currently live. Karen villagers join conservationists in a rally outside Government House on Feb 15, 2021 demanding they return and live in Bang Kloi in Kaeng Krachan National Park in Phetchaburi. (Photo by Chanat Katanyu) Meanwhile, a group of rights activists and Karen villagers under #SaveBangKloi banner on Monday issued a statement condemning park officials for violating the agreement between the government and the campaigning group. The statement said the operation was intended to vilify the Karen villagers’ traditional crop rotation methods. Images of burning forests which were published by some media outlets were old images, the statement said, adding any burning that took place was solely meant for waste disposal — not land clearing — which is in line with their traditional farming methods. "The government and extreme conservationists are trying to use these claims to destroy the image of Bang Kloi residents," the group said in the statement. The group strongly denied the accusation that the villagers are expanding their farmland, saying they cleared the last plot on Feb 12, three days before the demonstration outside Government House. The group threatened to stage more demonstrations to step up pressure against the government. Do you like the content of this article?
Read More

Kushinagar airport in UP declared an international airport:...